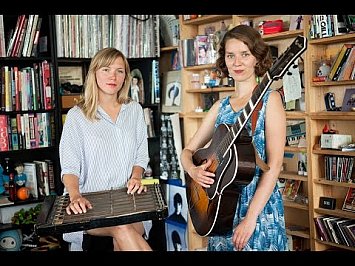 Now don't be put off by the name which conjures up Anika Moa's recent albums for wee ones, My Bubba from Sweden/Iceland's most recent single Gone was recorded by Jack White in his Third Man Studios in Nashville and it's a ghostly alt.country affair.

The My Bubba duo are My Larsdotter (vocals and Norwegian lap-harp-playing) with guitarist/ singer and banjo player Guðbjörg Tómasdóttir, aka Bubba . . . hence My Bubba.

And they are coming to Womad in Tarakani next year (details below).

When we previewed the Womad line-up we identified them as one not to be missed and noted this captivating contemporary folk duo specialise in alt.folk and “lullabies from the countryside”’.

Spellbinding is the word.

So time to let Bubba answer a world music version of our Famous Elsewhere Questionnaire . . .

I loved Peter and the Wolf by Sergei Prokofiev when I was very little, and a few years later Peter Andre won my teenage heart.

(apart from all the performances my family had to endure) I was 10 years old on a TV show in Sweden, imitating Björk.

A nun or a dermatologist.

2. The Swedish traditional Kristallen den fina (it can be heard on our latest album My Bubba & Elsa Sing Swedish Songs

3. Wait for the Moment by Vulfpeck.

A playlists with mine and My’s favourite songs can be heard on My Bubba’s Spotify page.

One of the best places I’ve played was at a small square in Venice. We entered the stage by Gondola and local folks sat in the square or enjoyed the show from their windows. The moon was full and stars bright. The most unusual one was perhaps a mental institution in Germany, it turned out to be one of my favourite shows of the tour.

One of them would be The Art of Loving by Eric Frohm. We have so many idealistic and dreamy ideas about love today. In this book Frohm paints a more realistic picture of what real love looks and feels like.

A live album by William Tyler recorded at Third Man Records in Nashville.

I miss the swimming pools in Iceland the most.

Pizza night with topping competition. I vote for Chocolate and basil.

Yes, in a way. My practice is more about being in tune with the world rather than scales or specific songs.

David Bowie sang, “Five years, that's all we've got . . .” If that were true, you would spend them where, doing . . .?
I would throw my computer away and spend them in nature.

No goals. But there will be more music.