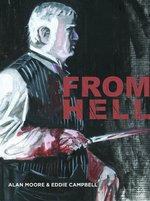 That there's yet another version of Jack the Ripper in cinemas - From Hell starring Johnny Depp, and based on this graphic novel - is hardly surprising. The mysterious Jack has fascinated generations of film-makers for three reasons: location, location, location.

This is meat and mead for any film-maker and that's before you've added the serial killer factor, taunting letters to newspapers purporting to be from the killer, bamboozled detectives and policemen speaking quaint period-English guvnuh, the conspiracy theories ...

Yes, there's plenty of life and depth in the Whitechapel murders yet and in this swirling, digressive story by Alan Moore there is a contentious theory involving Queen Victoria and her private surgeon, eerie architecture, bit players such as Oscar Wilde and the artist Walter Sickert, and much more.

Author Moore - whose time-shuffling narrative finds its equal in the grim, black ink illustrations by Eddie Campbell - is one of those ferocious intellects whose research and lateral approach to social history, politics and the comicbook tradition has previously produced two remarkable graphic novels: the apocalyptic Watchman, and V for Vendetta written from the depths of Thatcherite Britain.

From Hell was serialised in the 90s - just as Dickens' stories were over a century ago - and now it appears as brick-sized paperback to tie-in with the Depp movie treatment.

The lengthy explanatory annotations in the appendices are testament to Moore's research on the social and intellectual milieu of Jack's London.

This Ripper is covering up a scandal involving Queen Victoria's grandson who has fathered a child by a commoner.

A group of prostitutes, knowing this, connive to blackmail his associates, and Her Majesty - to be rid of the threat - allows her physician Sir William Gull to take care of the matter.

But Gull is more than he appears. He's a Freemason who sees his work as divine destiny and reads the architecture of Nicholas Hawksmoor - which is a disconcerting amalgam of Freemasonry, paganism and Christianity - as ciphers and metaphysical codes.

Recruiting an easily influenced coachman, he rides his carriage by night seeking out the women whom he then ritualistically disembowels with relish. He thrills at the kill as only the truly mad can.

On first glance, Campbell's art is a disappointing parallel to this ripping yarn as it is mostly trapped within regular frames. But then it takes on a life of its own: shadows creep across the faces; images and characters recur with chilling consequences; and when Hawksmoor's churches break the frames they seem even more oppressively powerful and eerily evocative.

This is architecture as character, and Campbell too knows the power of location, location, location. And when it comes to murder and sex, he renders them with such lurid, almost forensic detail, that this is sometimes a very graphic novel indeed.

From Hell is a disconcerting descent into madness via cryptic clues, but may test the endurance of those expecting the pictures to tell the story. They do, but the text is dense and demanding.

There are perhaps too many period digressions: John Merrick the Elephant Man, a young Aleister Crowley, Buffalo Bill's travelling show, the Fabians and others pass through to little effect other than to add to that sense of place and time, and to send you racing in puzzlement to the appendices.

That said, From Hell is also a creepy, mythic revision of the available information, speculation and secret knowledge rendered with deliberate echoes into our time. And it's a whole lot better than the Depp movie.