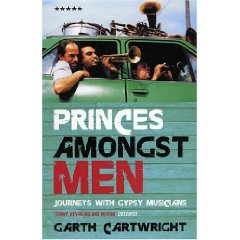 London-based author Cartwright made his name in New Zealand in the late 80s/early 90s as an opinionated and often contentious art and music critic, and an award-winning journalist.

His pugnacious approach to the art establishment ensured a bad boy image, but Cartwright backed it up with acute and provocative writing, although his star was tarnished by a notorious piece of plagiarism in Metro. Unrepentant, he later lit out for more demanding ground, travelling through the United States and Central America.

He has lived in London for over a decade contributing to numerous newspapers, music magazines, compiling intelligent albums of country music, and more recently following his passion: the lives and music of the Roma gypsy musicians of central Europe.

This turbulent, engrossing account is of his journey of discovery through the Balkans (often in great discomfort), as he drinks and dances with musicians whose names have seldom registered in European music magazines let alone the wider public consciousness. Substantial sections are lively, dirt-under-the-nails interviews, other parts are evocatively descriptive snapshots of the homes and towns where the musicians live. Not much is tasteful or pretty.

The internal musical politics of the Roma is well dealt with -- it is divided over populariser Goran Bregovic who adapts songs by others and claims them as his own -- but the sense of struggle, survival and that life is to be celebrated is the message of the Roma, a people marginalised and persecuted, humiliated, and regarded with suspicion.

Cartwright’s free-wheeling book is the necessary corrective to these fear-driven perceptions.

His own, often self-consciously vagabond, personality is everywhere in the pages: he over-punctuates with phrases from hip-hop, rock and pop culture as if to underscore his own street-cred, and too often adopts the Beat writer persona.

But they are small distractions in a fascinating and valuable book which is part travelogue diary, part sociology, part political assessment of lands torn by warlords and internecine struggles, and part exploration of Roma legend -- not that the self-mythologising musicians need that much help in the latter.

It is a book which succeeds by the sheer visceral nature of its subject, but Cartwright also fuels his writing with passages of great descriptive power, especially when describing unfamiliar music that is the voice of this underclass. He makes you want to hear albums by turbo-folk singers like the telegenic but vulgar Ceca (who was married to the warlord  Arkan Raznatovic, giving Serbia “a hellish Posh and Becks”), saxophonist Ferus the Wedding King, and the 62-year old Esma who revolutionised music from the southern Balkans. And yes, Cartwright has put together a companion CD.