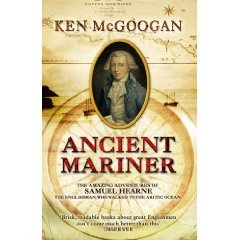 In the middle of the 18th century only 20 per cent of ordinary sailors in the Royal Navy were volunteers, the rest had been press-ganged into service. The reasons why so few willingly joined were simple: the money was lousy, the conditions woeful - on a typical frigate there would be two or three floggings a week.

During the entire Seven Years' War against France, 1500 British sailors were killed in action, another 133,700 died of illness or disease.

This was the environment Samuel Hearne entered at age 12.

Hearne was lucky, he joined a vessel under the captaincy of Samuel Hood whose enlightened and educated regime was lighter on the lash than many of his peers. As a young gentleman, Hearne learned the ways of navigation, saw many men killed and, by 18, was back in London looking for work. It came from an unusual source and allowed Hearne to write himself into history.

He took a position with the Hudson Bay Company and found himself based at the remote Prince of Wales Fort, one of the most important fur-trading posts in Canada. But while his boisterous companions drank and gambled - there seemed little else to do - he learned the languages and dialects of the numerous Native American tribes in the region.

His books and journals recount journeys through snowdrifts and barren country to find a passage through the Northwest and to where, rumour had it, there were enormous untapped copper reserves.

He charted much of this territory, took a wife on his return to the fort and was made its governor, and then was taken prisoner when French vessels arrived. The explorer, naturalist and navigator still wasn't 40, yet his adventures would continue.

His book A Journey to the Northern Ocean inspired fellow explorers and thrilled the English literary world. And, according to Ken McGoogan his biographer here, his story-telling - which was often haunted by horrific memories and guilt - would inspire The Rime of the Ancient Mariner and other poems by Coleridge.

Samuel Hearne lived an extraordinary and demanding existence, was an anthropologist before the word existed, and McGoogan brings his dangerous world and the admirable man to life again in these detailed, exciting and often terrifying pages.