If there is a sense of deja-vu about the current political landscape in the United States it is perhaps less Barack Obama being hailed as the inheritor of the mantle bequeathed by those golden martyrs John F Kennedy and Martin Luther King than it is in the presidency itself.

This Bush (“Omega Bush” as some critics call him, as opposed to his father “Alpha Bush“) has devalued the currency of democracy to woefully low levels, and alienated or destroyed his mandate within his own party. That he has been kept far from aspirant John McCain is emblematic of how tainted he is.

Yet here was a president who, after September 11, enjoyed the rare support of a huge percentage of the population, only to see it wither though poor judgement and worse advice, stubbornness, a personal agenda and gross stupidity.

He hasn’t been alone in those qualities as this book about former president Richard Nixon and his era reveals.

In freewheeling but cogently memorable prose the author dissects the character of Nixon through a kind of popular psycho-political analysis, locates this awkward and spiteful man within the slowly fracturing society of his time, and argues Nixon wilfully drove a wedge into American life which he exploited for his own ends.

When running for office his message would change depending on what audience he was addressing and sometimes there would be a deafening silence when issue were complex. He would let others hang themselves by loose talk.

But his motivation to power was personal and saw him use the presidency as revenge for every perceive slight against him: for being poor and having struggled; for being declined a scholarship to Yale where the fast set went; for being marginalised in law school; for not being popular and good looking . . .

When the cracks in society appeared from the late 50s onwards, Nixon exploited and manipulated them in much the same manner Omega Bush has with the religious right.

Over a long lifetime in politics (from 1946 as a Congressman to 1974 when he became the only president to resign) Nixon’s enemies were everyone from alleged spy Alger Hiss to hippies, former Beatle John Lennon to powerful lobbies within his own Republican Party.

Remarkable though it seems, Nixon was only four years older than “the young” JFK in those famous televised debates of 1960 (and only lost to Kennedy by a tiny margin), yet even by that stage he was a seasoned politician - and had been around long enough to be despised.

“Please, not when I’m eating,” said Democrat Adlai Stevenson at the mention of Nixon’s name at dinner. That was in the mid 50s, a decade and a half before Nixon won the presidency in a landslide in late 68, being sworn in the following year.

How Nixon accomplished such a victory runs against the current of his life which was punctuated by defeats and he had been repeatedly discounted as a serious player on the political stage.

In 1962 on losing the election for California governor quit politics with signature taciturn bitterness: “You won’t have Richard Nixon to kick around anymore” he told the press he loathed, then moved to New York where he plotted a calculated resurrection which involved exploiting the fears of “the Silent Majority” during the volatile years of Lyndon Johnson’s presidencies (63-69)

As of as much interest here is the changing America that Perlstein excavates: his sources are not simply academic texts, contemporary insights such as Joe McGinniss’ 1970 Selling of the President and the numerous other books written about Nixon, Watergate and the effect of the war in Vietnam on the home front.

Perlstein, a political journalist whose allegiance is to the Left, brings in voices from the street as captured by television and radio during the Watts riots, antiwar demonstrations, weaves raw data from polling companies with off-mike comments, adopts cinema-verite prose where he takes the reader into the frontline of riots or conventions, and doesn’t let liberals or Democrats off the hook either.

He ridicules Time for its glazed-eye coverage of Woodstock and allows for ordinary people’s voices from Middle America who wouldn’t buy the peace’n’love ethic any more than they would Black Panthers, Yippies, the Pill, women’s rights, the anti-war movement . . .

These were the voters whose fears and doubts Nixon pandered to, exploited and subsequently came to power on.

A petty man emerges in these 800 detailed and fascinating pages: Nixon, who promised national unity, held within him the nastiness and resentments that would be his undoing; mistrusted (when he didn’t loathe) the media; had an instinct for the most base layers of populism; was cunning, shrewd and evasive.

Perlstein’s skewering and often withering turns of phrase are more akin to that of a liberal PJ O’Rourke than Hunter S Thompson as some overseas reviewers have suggested (he calls Nixon “a serial collector of resentments”) and he compresses the unravelling after Watergate into a few pages. 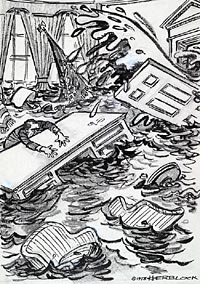 But the devil is in the accumulated details up to then anyway, the end inevitable.

At Nixon’s funeral in 94 Senator Bob Dole said “the second half of the twentieth century will be known as the age of Nixon”.

In a way, not as Dole meant it, that is true argues Perlstein - the divisions Nixon exploited remain within America. Many are still being massaged and manipulated, the schisms being worked for political ends rather than being repaired.

While Nixonland may be beamed in from an era of recent memory but long passed in many ways, there is still an important subtext here for civilians in any liberal Western democracy who yearn for certainties and are fearful of the changes they see around them.

It might be as simple as this: be careful what you wish for.