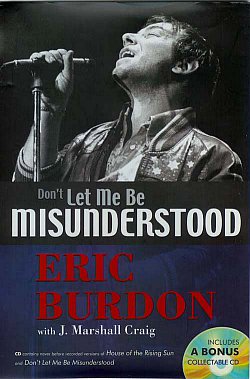 Eric Burdon -- frontman for Newcastle's ragged r'n'b band the Animals in the 60s -- tells a good story. In fact his life is a series of good stories, and before his New Zealand tour in 2001 he was spinning tales of rock yore down a phoneline from his home in California as if he was sitting at a beer-soaked table in a northern pub.

And when he arrived in town to play with yet another line-up of New Animals -- a blinder of a show, incidentally -- he was chatting on the telly and radio programmes.

In his blues-belter voice cured in Newcastle Brown, he could spin yarns about his famous friends John Lennon, Jim Morrison, Janis Joplin, Elvis and Jimi Hendrix. All of them dead - and Burdon, who came alarmingly close to falling over the edge many times, the remarkably durable survivor.

Burdon has now committed his stories to print -- but not for the first time.

In the mid-80s he wrote I Used To Be An Animal, But I'm Alright Now.

His new autobiography Don't Let Me Be Misunderstood (the title taken from one of the Animals' many 60s hits) came out in the United States in 2002 to uniformly excellent reviews and Burdon has been out on the author circuit.

Burdon may have been a singer in a rock'n'roll blues band - and later front for the multiracial group War - but he was also an astute and hard-nosed observer of life, especially its racial injustices which he encountered as a white man who loved black music when he went to the States for the first time.

The book however has the feel of being reminisced into a tape recorder for co-author Marshal Craig. His recollections are told with almost unnerving honesty, and he doesn't fall for self-aggrandisement. In fact, he tells of his failings and foolhardiness with rare candour and dry northern humour.

You don't have to know much about the Animals -- five top-20 hits in New Zealand between '66 and '68, Stateside acclaim of Stones-like dimensions in the mid Sixties -- to enjoy these raunchy reminiscences because Burdon's language is blunt, colourful and thoroughly evocative. The first sentence is arresting -- “Fucked from the get-go” -- and he concedes immediately, "It's not a terribly graceful way to begin my tale, but it's true."

He then chronicles how he lost millions through bad managers, worse contracts and poor business decisions, right from the writing credit on their first hit House of the Rising Sun.

Although it was a cover of a traditional song -- an old acoustic blues number which they plugged into (Bob Dylan later credited them with encouraging him to go electric) -- they could claim a co-credit.

Their manager, Mike Jeffrey, however, said there would be no room for all five members' names and suggested just that of organist Alan Price.

"Insanely we agreed. With the stroke of a pen, the rest of the Animals were screwed. Ripped off from the get-go -- from the inside. We should have known better than to trust Alan, a former tax-man."

The song went to number one around the planet and launched the hard-drinking, no-nonsense blues rockers in America, Burdon's spiritual home.

Of course they were caught in the usual follies -- dressing as wolves with pointy ears for the television special The Dangerous Christmas of Little Red Riding Hood with Liza Minnelli wasn't the wisest of career moves -- but Burdon managed to survive them all, even sharing a bus with "the crazed Ku Klux Klan-like NRA maniac Jerry Lee Lewis" who would bait and abuse Chuck Berry, telling him to "get to the back of the bus, nigger, where you belong".

Through digressive, non-chronological anecdotes, he reveals how he was "the Eggman" of Lennon's I Am the Walrus (not surprisingly, it involves a naked woman), that he believes his close friend Jimi Hendrix was accidentally killed by a girlfriend who gave him too many sleeping pills so he would miss a flight to America the following morning, and the racism they encountered when trying to sing black music in America's South.

There were remarkable friendships with Steve McQueen, John Lennon, Linda McCartney whom he knew pre-Paul, Jim Morrison ("whose good looks always helped hide what an arsehole he could be") and John Lee Hooker. All now dead.

And jazz multi-instrumentalist Rahsaan Roland Kirk, whose dying request was to be cremated and have some of his ashes mixed with top Turkish hash and smoked by his friends, including Miles Davis and Burdon.

He met Muhammad Ali, once stopped at a bar in LA and ran into his heroes Jimmy Witherspoon and Big Joe Turner who invited him on stage with them, and had an abrupt confrontation with Nina Simone who berated him for stealing her song Don't Let Me Be Misunderstood and getting a hit out of it.

She hadn't counted on a tough-minded Geordie, and Burdon came right back at her. They became friends.

And then there were the casual encounters with various law enforcement officers, drug dealers and many luminous and available women.

Music has been Burdon's calling -- he is widely acknowledged as one of the greatest of white blues singers, the accompanying three-track CD with previously unreleased versions of Rising Sun and Misunderstood almost confirming it -- but the business has been cruel to him.

However, the unpredictable ride through fame, drugs and hard times has allowed him to live in Spain, Germany and California, perform at the Monterey pop festival, San Quentin prison with Witherspoon (he snuck in speed which he gave to some prisoners), and war-torn Sarajevo with an orchestra.

Music has been his passport, the business the curse that goes with it. But even that he looks at with wry amusement, as if you could expect little else.

He was warned by English musician Graham Bond, who passed him his first joint the night he learned House of the Rising Sun had gone to number one in Britain.

"Son," Bond told him, "you're gonna be famous, the whole world's gonna know your name. But if you take up the blues, you'll never have any money."

It proved to be largely true, and even the trappings of fame were not what they seemed: he tells of drunkenly breaking the frame on a gold disc the Animals received, and playing it.

"It wasn't a chart-topping Animals album at all ... it was an old Connie Francis record. That's how cheap and shallow the record business can be."