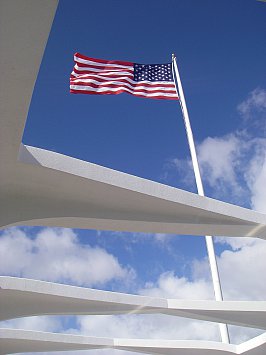 Recently a well-known New Zealand columnist asked if, given the election of the new and popular president, it was possible to like America again. Perhaps the writer was being witty. But for many -- here, but more especially in Europe -- equating America’s political reach for the amorphous, diverse and often quite extraordinary country that is “America” seems common.

Since the formation of what we know of as America today -- and even before -- its citizens and visitors have grappled to come to terms with it. From the earliest European explorers, there have been those writing about that great continent and its inhabitants, their social customs, the nature of its society and politics. Alistair Cooke regularly delivered his Letter From America for almost six decades and had an inexhaustible well of stories.

In Easy Rider the young Peter Fonda went looking for America, and tellingly couldn’t find it.

BBC Washington correspondent Matt Frei didn’t so much go looking for America when he arrived in 2002, but ran headlong into life inside “the Beltway”, that cabal of American politics in which he found many facets of government, but also just as many of the social relationships that forge or divide America.

This recently updated edition of his witty, astute, insightful and sometimes worrying book pulls in the hopes of Obamaworld, but mostly puts the focus on the Bush administration and the man at the top.

In his role for the BBC Frei was never invited to ask a question at a press conference in three years. He had only “two in-depth conversations with the most powerful man on earth, one had lasted 15 seconds, the other 30” before a curious, micromanaged encounter which is oddly sad and deeply troubling for what it reveals about Bush.

But Frei discovers much more about America than its political masters (although they loom large and menacing in these pages): he notes that having been based in various cities around the globe “to a greater or lesser extent the hand of Washington, heavy, subtle or conspicuous by its absence, could always be felt in all these places. America was everywhere and I had been reporting from -- and on -- the receiving end of it policies for 17 years”.

But he notes, if the motivations of America seem clearer from a distance, up close “there was a vast multi-layered country sprawling around it“.

In the course of these pages he unearths as much about that place as the curious world within the cloisters of the capital.

In these connected observations Frei moves easily from the personal and practical to the bigger picture: he notes he couldn’t get a credit card for a year because he had no credit history in the US, but had “no trouble finding a bank that was prepared to lend me a king’s ransom immediately to buy a house”. That was written before the sand shifted and the houses of cards fell.

He peppers in incisive asides: if McCain had won in 2008 then the European world -- which had never elected a black leader - could smugly note how racist the country was; since George Washington there have been 43 presidents and 18 assassination attempts, almost one in 10 presidents has died a violent death while in office, “Stuntmen and soldiers have a better survival rate.”

He attends grotesquely manipulated press conferences which ensure a president only answers soft questions from friendly journalists. and explains why international media get no time: “There are no votes in Wales,” said Karl Rove.

The Washington he lives in is grid-locked daily by motorcades whenever a senior person in the administration gets on the move; and the city is littered with lobbyists. It boasts 32,000 lobbyists but only 8000 policemen and 3000 teachers, and 80% of congressmen and women end up working for lobby firms.

Frei’s familiar style allows him to spin the anecdotal alongside the raw facts to amusing effect, especially when he notes the peculiarity of the electoral college system which means remote and underpopulated Iowa gets unnatural attention from candidates: Hilary Clinton arrives in a small town with an entourage of secret service agents, advisors, journalists and a police escort -- 85 people in all -- to address 24 Iowans in a barn.

But the local level is where the votes are won: there has been no national television ad campaign on the major networks since 92. In this fine focus of issues to specific electorates (the whispering you hear is from pollsters) so votes and elections are won.

But if the candidate is wanting there is nothing that can be done. Of the hapless John Kerry he notes “His verbosity worked as a fire blanket on the feeble embers of charisma”.

Although focusing with the sharpness of a laser on political life and machinations in the capital, it is beyond the Beltway where the other America becomes compelling.

Frei meets the remarkable, good humoured pastor Rick Warren -- “a six foot two walrus of a man sporting a drooping moustache and a pot belly festooned with the swirling primary colours of a Hawaiian shirt“ -- whose spiritual self-help book The Purpose Driven Life has sold more than 30 million copies in hardback (“It reads like a South Beach Diet book for the mildly sinning and the marginally confused.“)

Pastor Rick, as he prefers to be known, sells set-up packages for people to start their own churches for US$15, and has given over US $70 million of his own money to help fight Aids in Africa.

Frei offers an explanation of American’s insatiable demand for churches and worship centres -- more than 4500 new churches built every year -- and it comes from the fundamental difference between America and Europe: one third of American households moves every five years and where in a less itinerant society the union or bridge club is the glue which holds communities together, in mobile America people gravitate to welcoming churches to give themselves a sense of belonging. Astonishingly that capital of earthly sin, Las Vegas, has more churches per capita than anywhere else in America.

This reflects a significant difference between the New World and the Old: “Americans believe,” says Frei. “Europeans doubt.”

Nowhere is that faith encountered with more stark sadness than when Frei is in West Virginia.

In the grinding rural poverty he encounters a family: the wife weighs over 136kg, is suffering from Type 2 diabetes and will possibly lose a foot because of it. Her husband is a truck driver who gets home once a fortnight, one of the sons obese and the other ill-looking.

They eek out a living, cannot afford medical insurance, but because the husband works they consider themselves proudly middle-class.

In fact at some level they are: both sons have iPods, they all have mobile phones, they own three cars and a flat screen television . . . But they are dirt poor, their diet is woeful, and their health is imperilled.

“And yet they feel constitutionally optimistic,” observes Frei. “They have an inalienable right to dream of a better life, even if reality dictates they will never achieve it. It is one of the great blessings of the American political system.

“In this country, the poor still think they are princes-in-waiting.”