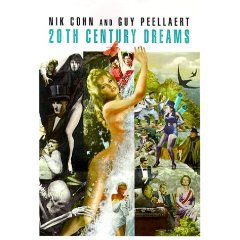 Max Vail was an extraordinary character. Part-Zelig and part-Chauncey Gardiner, he was seen in the company of the great and famous throughout last century.

He counted among his friends Andy Warhol, John Lennon, Rudolph Nureyev, Truman Capote and all the important Kennedys.

His funeral in 2000 - he died at age 100, his life spanning the century that he somehow defined -- was attended by Michael Jackson, Mikhail Gorbachev and Prince among many others. Many of them real princes.

Most were surprised Vail had known the others in attendance, such was his ability to arrange the various components of his life like a Chinese puzzle of interlocking but separate chambers.

He never sought the spotlight and seemed to have never have had lovers or partners. Although he had no visible income he owned homes in London and Rome and an estate in Jamaica. But mostly he lived in his New York apartment where the door was answered by his manservant Habib, a North African who wore Arab garb and sported the visible results of his former career as a boxer.

Yet, as with the chameleon-like Zelig -- the central character of Woody Allen’s film of the same name -- while appearing in the company of the famous, the details of Vail’s life were cloaked in mystery. And like Chauncey Gardiner -- Peter Sellers’ character in Being There -- Vail possessed an uncanny ability to be all things to all men. And women.

Born Maxim Valesky in 1900, he grew up in St Petersburg and at 14, after a childhood on the streets, was taken in by Rasputin, the mystic who had the ear of the Tsar and Tsarina.

When the Revolution arrived the association proved dangerous so he fled to Zurich. In his subsequent travels he met Sigmund Freud and Mata Hari, befriended Isadora Duncan, Proust and Diaghilev, and eventually made his way to New York becoming an American citizen in 1940.

His sphere of influence widened and in the first half of his life he was seen in the company of Hitler and Picasso, Garbo and Ellington, Einstein and Hemingway.

Vail -- who John Lennon referred to as “The Wizard” -- knew everyone, kept his own counsel about the secrets they told him, and the standard gag when he was photographed with the likes of Mick Jagger was, “Who’s that with Max?”

Yes, Max Vail was a Zelig and a Chauncey Gardiner.

And like them, he too was an entirely fictional character.

The story of Vail’s unique and non-existent life forms the basis for 20th Century Dreams, a collaboration between writer Nik Cohn and artist Guy Peellaert, the same pairing which produced the equally fanciful Rock Dreams back in 1974.

And as with those illustrations of imaginary rock events (a young Bob Dylan as Depression era hobo, the Drifters under a boardwalk), 20th Century Dreams is a garishly rendered, irreverent alter-history where the Queen lights the cigarette of Idi Amin in a Vermeer-like chiaroscuro, where Prince arrives at the motel room with a bottle of champagne as his lover Princess Diana is undressing, and where Elvis as an honorary cop busts a young dope smoking Bill Clinton.

Taken from the imaginary journals of Max Vail, the accompanying text shines small lights into corners of fanciful history.

Imagine then Frank Sinatra and his girlfriend Roxie winning the dance marathon which had lasted 16 days. Next stop Broadway, says Roxie. “But Frank saw no reason to leave Hoboken. If you could make it there, you could make it anywhere.”

This is a new and sometimes better history: Einstein explaining the physics of motion to Babe Ruth and improving the slugger’s swing? Francis Bacon painting Margaret Thatcher’s portrait? A gaunt William Burroughs as the unwelcome undertaker at the door as Courtney Love leans over the body of Kurt Cobain?

20th Century Dreams is funny, slightly ghoulish and tacky in places, and artistically it is sometimes clumsily rendered.

But it contains a wonderful cast and is a testament to an extraordinary life that never happened.