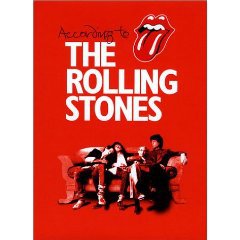 The Rolling Stones have had quite a marketing profile in their 40th-anniversary year: the reissue of all their early albums through to the mid 70s; the 40 Licks double-disc hit-stacked compilation; the 40 Licks global jaunt (billed as their "farewell tour" in some circles) which has been more musically and financially successful than any previous one; the new DVD live set; and now - almost inevitably - the tie-in autobiography.

This isn't the first Stones autobiography (they started in the mid-60s with Our Own Story, an excellent insight into their formative years) but as a large-format hardback with Jagger, Richards, Watts and Wood reminiscing during the 40 Licks tour, it has inevitably invited comparisons with the Beatles' Anthology.

The similarity is shallow as the Stones' career is more problematic. Where the Beatles' was a closed entity, that of the Stones' rolls on - and before and during the 40 Licks album/tour/T-shirt event they were interviewed frequently. Recently Mojo magazine offered a thorough special issue which not only covered their career and included lengthy, informative and sometimes funny interviews with the surviving protagonists, but also had profiles of their late longtime pianist Ian Stewart and Gram Parsons, who brought country music to Keith (but gets only three passing references here) alongside analyses of key albums and their social context.

What According To can boast is that it is the Stones' story told by the Stones themselves. Well, some of them. The inconvenience of death means neither Brian Jones nor invisible but key member Stewart have contributed. Stewart's reminiscences may have been hard to access (he was seldom interviewed) but being dead didn't prevent John Lennon's voice being heard in the Beatles Anthology, nor that of the late Graham Chapman in the new The Pythons Autobiography which more closely resembles the Beatles' book than According to. Lennon and Chapman's recollections were taken from the numerous interviews they gave, and Brian Jones - who founded the Stones - was certainly much interviewed and quoted in the newspapers.

The voice of former Stone Bill Wyman, who didn't re-sign the contract in '91, is also absent from these 350 pages. That is more understandable, he has already written his exhaustive Stone Alone memoir and delivered a coffee-table breaking Rolling with the Stones picture-book of memorabilia a year ago. His version has already been heard - yet its absence still detracts from this.

One of the pleasures of both the Anthology and The Pythons Autobiography were the reminiscences of childhoods in post-war Britain, the crucible for the creativity to come. That is skipped over rather more lightly here, the anecdotes being about the music they heard rather than their home lives and school days.

So, all those omissions aside, what fills these well-illustrated pages? Aside from contributions by contemporaries and fellow travellers like photographer David Bailey, record label boss and friend Ahmet Ertegun, longtime business manager Prince Rupert Loewenstein and a few others, it is the surviving Stones walking you through a sanitised version of their illustrious career and sometimes wayward lives.

What is central is the music. You'll find no mention here of Mick Jagger's home on the exclusive Caribbean island of Mustique, but he does reveal a longtime love for "really fast, shit-kicking country music" even before he met Keith. However his voice disappears at key points (nothing about the Miss You period when he brought New York disco and glitterball soul into the group's sound) and it is Richards who gets the lion's share of the text. No bad thing: he's candid and amusing and has a better memory for details of the music than you might expect. He's a little more vague on other matters.

There are some interesting asides: Wood saying how only persistence and good timing would get you a writing credit; Robert Stigwood of PolyGram sending Loewenstein a magnum of Dom Perignon under his name and a bottle of cheap Californian Korbel with a note reading "Sent by Ahmet Ertegun of Atlantic Records" attached, when trying to secure a Stones distribution deal in '77; Watts being asked to drum along to Dr Dre's The Chronic and saying it was just simple music ...

The Stones who emerge here are those we are already well familiar with. Jagger: astute, canny, businesslike and with an eye to staging, but also a musical chameleon and magpie. Richards: more witty and intelligent than his rogue gypsy attitude suggests and thoroughly grounded in music of all kinds. Wood: highly amusing and with an outsider's eye still after nearly 30 years in the band. Watts: consistent in his diffidence and indifference to what he thinks is a silly job and even worse lifestyle.

There are long quotes which should have been culled: Jagger on songwriting, "The problem with song-writing is that at the time you have to think that the song is a good thing, and that at some point it's a wonderful creation, but at the same time it usually isn't wonderful ... " Blah-blah.

Then there are others, usually from Richards, which leap out: "Musically I've never laid down a lie. I'll lie to everybody else - especially judges! - but I won't lie to my audience ... I just wish to transmit the joy I feel to somebody else and if I can do that, I've done my gig."

According to the Rolling Stones is as the title says. It is a story told with selective memory at a time when they had an important tour under way. It is no Anthology - but for the reasons outlined probably never could have been - but in this anniversary year which just keeps stretching out, it is another chunk of Stones memorabilia.

Longtime followers will learn little new and might prefer to seek out that Mojo special issue, but the casual fan will find much of interest and, if they are lucky, it will be wrapped up under the Christmas tree. That seems the intention.