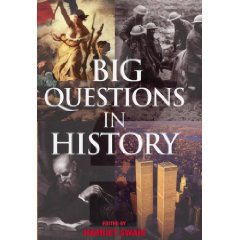 History is, as a wise man once observed, just one damned thing after another. But we remain endlessly curious about it: each new generation or political ideology seeing it through its own prism and interpreting events accordingly.

Pity then the editor -- in this case Swain, deputy features editor of the Times Higher Education Supplement -- who tosses out 20 big questions to various academics for them to briefly essay.

Among the questions Swain asked these mostly British luminaries to comment on -- without the need to provide masses of leaden supporting evidence -- are those perennials which may have kept you awake at night: What is history? What wins wars? How do cultural booms happen? And how does private life affect public life?

Between them the academics, few of them familiar names outside academic circles other than perhaps Felipe Fernandez-Armesto, make a fine fist of answering the questions in a manner which is informative, stimulating and highly readable.

Sheila Rowbotham, professor of gender studies and labour history at Manchester University, tackles the private/public life conundrum by illuminating changes in perception, especially since feminism redefined the personal as political. And readers might wonder if the division between media and public interest in politicians' affairs reflects a Victorian moralism in the media which public sentiment doesn’t share . . . although the case of Bill Clinton makes an interesting exception.

Fernandez-Armesto makes an interesting case for a consideration of geography in interpreting history, and there is a fascinating essay on what makes a great leader followed by an equally compelling question, How Does Personality Affect Politics?

After each short but free-ranging essay there is a commentary, and sometimes counter-argument, by the editor or someone else from the magazine.

With a neat circularity from the opener What is history? to the final essay Can history have an end? (only ideologues argue that, according professor Benjamin Barber from Maryland), this makes for an intelligent, often informative and occasional provocative collection which will bring illumination to any argument or dinner table discussion.