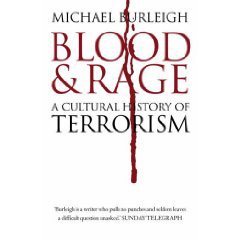 President Barack Obama’s recent speeches directed at the Islamic world – coded or clear – are an obvious attempt to defuse (or perhaps simply diffuse) the flashpoints between the West and the Muslim world. Many argue this overdue hand of friendship and a willingness to engage in dialogue will assuage the current climate of mistrust and fear which has lead to disaffected people across the Islamic world turning to terrorism and radical philosophies to counter the threat of Western cultural imperialism as much as to confront occupying forces.

Nonsense, says hyper-ventilating historian Burleigh. Those who argue the invasions of Afghanistan and Iraq created the circumstances for the dispossessed and disillusioned to turn to terrorism are blind to history, he huffs: Islamists have been sewing fear and violence internationally for decades prior to those events, not the least attempting to blow up the twin towers of the World Trade Centre back in ‘93.

And those who advance the notion that today’s terrorists will all become benign statesmen such as Nelson Mandela when the wheel of history turns “need a psychiatrist rather than a historian”.

That kind of blunt talk perhaps places the Burleigh closer in spirit to commentators on the Fox Network than the more measured voices on terrorism, but this densely written study which draws from across recent history makes some uncomfortable but salient points.

Burleigh agrees dialogue is important but not appeasement: he ridicules the Bishop of Breda who said Dutch Catholics should call God “Allah” in the interests of easing tensions. He also says it is absurd, unhelpful and dangerous to ground present day problems by alluding to the past in semantic shorthand (each new villain is not simply “another Hitler“), and that we must be wary of drawing simplistic parallels between various kinds of terrorism.

Although his long view accounts for the similarities between groups who have practiced terrorism – he defines his term at the outset – he is also careful to note their differences and idiosyncrasies.

His study – punctuated by telling and sometimes even amusing anecdotes as well as historical context – encompasses an array of superficially similar groups: he starts with the pre-IRA nationalist group the Fenians who were among the first in modern times to discover the usefulness of using a foreign base to fundraise and launch its operation, in their case America with its ex-pat Irish communities (as Zionists would do decades later with supportive Stateside Jewish organisations).

He moves through Russian nihilists and revolutionaries, those struggling for a Palestinian state (and those who used terror tactics to create the state of Israel), anarchists and anti-colonialist activists, the Red Brigade and Red Army Faction, and the more recent Islamist terror cells.

The socio-political complexity that these various groups exemplify – from bored rich kids finding excitement in anti-establishment activities to those for whom terrorism and self-sacrifice is a way of life, and death – makes for a potted history of the dark side of modern times which can be uncomfortable reading.

While there are sophisticated and complex minds at work behind many of these movements, there is also a farcical element: swarthy Mossad agents searching for the Black September mastermind Ali Hassan Salameh in Oslo tended to stand out in small provincial towns in Norway (and assassinating a waiter by mistake wasn’t smart either); and Ulrike Meinhof at a PLO training camp in Jordan almost ended her career as a terrorist when she pulled the pin on a grenade “without grasping the point that she was supposed to throw the already fizzing object”.

Those inclined to romanticise terrorists will come away with tarnished images. This is Burleigh on Irish Loyalists: “[They] were often like proletarian thugs in any British city, with their beer bellies, cropped hair and tattoos. They were not sophisticated people; their idea of an exotic meal was to add curry sauce to a bag of chips, while venturing as far as Tenerife for their first overseas holiday.”

He is equally merciless when describing the shortcomings of Provos, Arab mujaheddin fighters, various police and intelligence agencies . . .

Burleigh offers insight, anger at complacency and woolly thinking, some passages of pure cant and rant, and some solutions.

He observes terror organisations and violent ideologies do fade with time and if we consider the Cold War lasted from 1947 to 1989 “on that calendar we are in the equivalent of 1953 in the struggle with the jihadi-salafis”.

The end of Islamist terror will come when it is wholeheartedly rejected by the Islamic world from the mullahs down. That is starting to happen – indeed has always happened – but the voices need to become louder than the shrill calls to arms and those of anti-American and anti-Israel intellectuals whose “hatred is so pathologically ingrained that they become apologists for the most reactionary elements within Islam”.

He also notes that last year 6000 Pakistani citizens were killed by bombings – this is not a failed state like Somalia, he reminds – and that “many are too diplomatic to say it, but Pakistan has become an international menace, while the Pakistani diaspora (many of whom are Kashmiris) is a major security threat within Britain”.

Burleigh will win no friends in the Left or those apologist communities with such sentiments in Blood & Rage – this is an updated reprint of the widely hailed 2008 book – but his all-encompassing look at the origins and manifestations of terror is compelling, sometimes scary, deliberately plain-spoken and provocative.

Of the West which speaks with many tongues he speculates: “We are likely to sound more Australian in future; in other words, politicians of all party persuasions will seem to present a united front in making it clear there are lines in the sand, regarding the liberal democratic nature of our societies, which are not going to be crossed”.

That sounds very “New Zealand” too.

Perhaps we would have to be tested by blood and rage before we knew for certain.