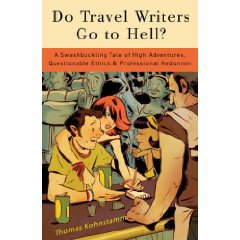 Some years ago I was invited by Lonely Planet to write for them. This was flattering and exciting, but there was a catch: I would have to undertake a research trip at my own expense and write it up within their strict guidelines.

Around the same time the American writer Thomas Kohnstamm was also approached. He abruptly quit his boringly corporate Wall Street job, threw his cellphone in the East River, left his girlfriend, went on a heroic bender with his self-medicating friend “The Doctor” for a few days then embarked on an equally drug and alcohol-fuelled journey into Brazil.

I went to Paeroa, the self-described “antiques capital of New Zealand”.

Oddly enough we both learned the same thing, it isn’t easy writing for Lonely Planet: the money isn’t good, you pay for everything yourself and can’t trade on being a travel writer to get discounts (Kohnstamm dealt Ecstasy to keep afloat), and the brief can demand hours of research over long distances. Kohnstamm’s beat was an area the size of the US West Coast and he was required to report on 150 hotels and bars as well as where you could get your laundry done, the national parks and bus schedules.

The pay-off for Kohnstamm -- who speaks Panish and Portuguese, and has an MA in Latin-American studies from Stanford University -- was adventure, serial sex with exotic women (one with a waitress on a table in a restaurant after-hours which he wrote up as “the table service is friendly”) and enormous amounts of drugs and alcohol.

It makes for his funny, hedonistic book of misadventure Do Travel Writers Go to Hell? which is closer in spirit to Hunter S. Thompson than Paul Theroux -- but as the Kirkus Review also noted, “Kohnstamm brings more than just anecdotes: He offers a solid understanding of the mechanics of the travel-writing industry and a unique ability to illuminate that world to readers.”
When Kohnstamm departs from bars and bed-hopping, or persuading himself into serious research, he takes a scalpel to the guide book trade and notes Lonely Planet -- for whom he subsequently contributed to other guides -- pays on average less than minimum wage per hour, is often unsupportive of its writers in the field, and makes demands almost impossible to meet. His book will be well-read in Lonely Planet offices, if not popular.

“They know the book is coming out. I’ve been contacted by a number of other Lonely Planet writers and everyone who has bothered to be in contact had been, ‘Good on you, it’s a story that needed to be told’.

“But the book is fundamentally about my personal experience and not intended as an expose on Lonely Planet, nor do I attempt to shoot it down. Obviously when the book was written it was given a full legal review.”

He also notes that Lonely Planet which once told “crafty, budget travellers how they can slip into the pool at the large resort hotels” now aims at different demographics. Writers have to be mindful of the top-end traveller, business people, those who only have a few weeks holiday, women travelling alone, what information disabled, gay/lesbian and vegetarian/vegan travellers need . . .

“Some writers hold that against Lonely Planet as them being sellouts, but I understand it. It’s the same trajectory as many other businesses. Not maybe the best comparison, but I watched Starbucks which was the place I used to go with my Dad when I was a kid and have hot chocolate. There were six in Seattle and you knew the people who worked in there.

“To be competitive travel guides evolved and that is the trajectory of a successful business. So it’s not just Lonely Planet. Rough Guide has done the same and while I’m not as familiar with some of the mid-range or high-end guide books, they have tried to insinuate themselves more into the backpacker or independent traveller market.

“Everyone is clamouring for everyone else’s business.”

And travel is a big and changing business.

“Exactly. One of the main points I tried to make about guide books - and I didn’t intend this as an expose on guide books -- but as the whole phenomenon has become bigger and mainstream these companies have tried to promote themselves as the most comprehensive, although I’m not saying they say this explicitly.

“I use a guide book all the time and it’s great when you show up at 11 o’clock at night at the airport and don’t know what the average price of a taxi into town is, or you have to pick a neighbourhood to stay in. It’s great for certain things, but to follow it in a paint-by-numbers way is a mistake because the information is somewhat arbitrary.

“I was in Argentine Patagonia not long ago where Lonely Planet and Rough Guide have some coverage. But with greater access to computers and printing a lot of locals or ex-pats living there were coming up with their own local guide books which would cover just a town, or a flyer they would give free in youth hostels which was like a localised guide book covering that region.

“So while certain things have become more flattened for a broader audience there is always a market for the more localised and in-the-know.”

Now living back in Seattle where he grew up Kohnstamm feels more settled after years of travel, most of it through South America.

“I was kinda crazy after running around for so long,” he laughs, “but now I live three minutes from the house I grew up in and right down the street from my folks, which is a strange thing to wrap your head around.

“I showed up in Seattle two years ago with $38 in my wallet and had grand plans to go up to Whistler and ski for the winter, then I met a girl . . . Writing the book clipped my wings a bit too.”

He has written for various travel magazines (“not Pulitzer journalism but it pays the bills“) and is drafting a proposal for another book -- about “the joys of illegitimate fatherhood”.

As a consequence of travelling?

“Exactly. I’ll leave it at that,” he laughs and says he is looking forward to coming to Auckland’s Writers and Readers festival to speak about his book which is subtitled “a swashbuckling tale of high adventures, questionable ethics and professional hedonism”.

I hope he finds time to go to Paeroa.

This article appeared in the New Zealand Herald, April 2008