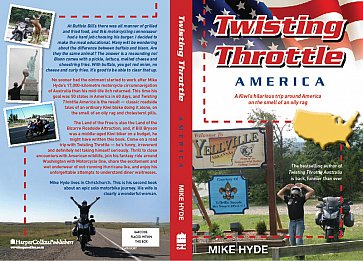 You can’t deny Mike Hyde from Christchurch has seen a lot of America -- but you’d also add quickly he barely encountered it.

That’s what happens when your task is riding your Suzuki 1000cc V-Strom through 50 states in 60 days.

Whole states fly by with John Denver, Roger Whittaker, Neil Diamond and Sweet in the helmet speakers: Tennessee gets three pages and very little of what he says is actually about Tennessee; his 397kms through flat and featureless North Dakota gets four lines and his motorcyclist’s version of The Rime of the Ancient Mariner, “Hour after hour, hour after hour, he rode, nor breath nor motion, as idle as a pointless blip upon a pointless ocean . . .”

And later: “I’d like to tell you more about Louisiana but what I saw from the interstate . . .”

Variants on “but time was ticking on and I had to fuel up” become a repeated refrain.

Within pages -- Hawaii and Alaska on rented bikes are dispensed with quickly but are interesting micro-journeys -- a pattern is established: get up and on the bike; the need to make good time means sentences like “I was riding fast and avoiding towns”; stop briefly at a Denny’s, McDonalds or a cheap diner (sometimes just grab a bite and sit on the bike eating); that night pitch a tent and crash out. If he takes a cheap motel room he watches the Weather Channel.

Days and weeks go by in this manner: “I would have liked to linger at Bison Bill’s Buffalo Base, but . . .”

In order to achieve this remarkable feat Hyde -- who styles himself Twisting Throttle and has previously written about his 17,000km circuit of Australia -- avoids big cities (no New York, Los Angeles, San Francisco or New Orleans, in fact Mississippi and Louisiana are dealt with in the same three pages) but neither can he linger in those small and interesting towns he passes.

The best he can do often is note their amusing names (“Zinc, Coin, Dogpatch, Farewell and -- my personal favourite -- Fifty Six“) and weave in an anecdote about some amusing event that once happened there.

When he does make a detour or stop it is to places with potentially funny stories, such as the future birthplace of Captain James T Kirk of the USS Enterprise from Star Trek. But the site in Riverside, Iowa is placed in no greater context.

He has to move on: “I paid my respects at the birthplace headstone, kicked my bike into gear, and tore off down the main street into Iowa’s big, wide, empty interior.”

Hyde also imagines conversations or encounters he might have had (among them riding with the President when he gets to Washington DC).

He repeatedly offers his version of American-speak: “Hair larken pain-arse?” and his translation “How do you like them peanuts?” Once is funny. There are far too many such examples.

Americans make rare appearances however, this is a story about the bike, the GPS, the roads and the sights passed.

Yet despite what seem like opportunities lost (Vicksburg is a shrine to him because that‘s where Coke was first bottled, but he doesn‘t get there), there is also something compelling about this story which is almost scrupulously free of drama.

Hyde loves wordplay and a tall tale, and when the two come together he is genuinely witty: then again he has days and days riding alone to think on such things.

Hyde has amusingly, and with great self-deprecation, documented the project he set himself. But it is hardly, as the blurb suggests, what Bill Bryson might have written if he were a middle-aged Kiwi biker on a budget. He takes the photo, buys the fridge-magnet and moves on.

In the closing pages -- Oregon and Washington dispensed with, and more than 32,000kms behind him -- Hyde concedes “I liked America and had only scratched the surface of this huge and diverse place.”

He speculates on what his next journey might be. Whatever that might be I hope for his sake and ours he slows down.

On the rare occasions he does so here he is a very funny, sometimes insightful and thoroughly enjoyable writer with a keen eye for detail and a wry turn of phrase. Around the midpoint of this 560 page doorstop by the acclaimed writer David Mitchell, anyone who has a loose working knowledge of how Sixties pop and rock bands like the Beatles, Stones, Who and... > Read more 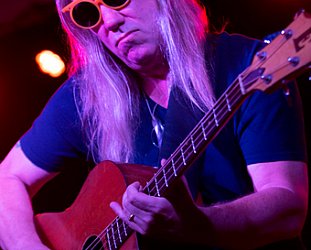 Ahead of his veteran band Violent Femmes' return to New Zealand, Brian Ritchie talks about his other life – working at Tasmania’s Mona art gallery.... > Read more