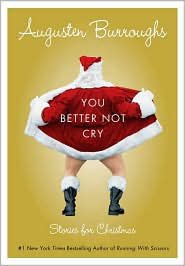 Ah Christmas: ‘Tis the season to be . . . despondent and predictable? It is the time to bemoan the commercialisation of a Christian festival, to listen as miserable souls announce “I hate Christmas” to all who will listen, and recall those ghosts of Christmas past when the festive season turned into family turmoil or personal disaster.

Few of us however have probably had quite the run of Christmases that American writer Augusten Burroughs (Running with Scissors) has endured.

In this slim volume -- seven short vignettes and segments from Running with Scissors appended as a marketing hook -- Burroughs recalls snapshots of this time of year as only a gay, gifted, alcoholic product of a dysfunctional family can.

Arranged chronologically, the stories move from a memoir of childhood where he confused Jesus with Santa (“Jesus brings presents to all the poor, foreign and crippled children, and Santa brings presents to the regular children, like me”) through a bleak tale of waking up in bed beside “a dirty old Frenchman” who was in a Santa suit when they picked each other up in bar.

Later there is the loss of a partner and finally a beautifully crafted, redemptive tale of love found again and the joys of domesticity, the simple things and a Christmas tree.

The opening piece is the least successful -- well written and funny but as with so many writers he posits himself as that insightful outsider child grappling with the bewildering adult world -- but thereafter, when the prose and the pace slows, some real magic is revealed.

The Santa story might make you feel unclean despite the humour (“if one was sexually attracted to Santa, one had departed from mainstream reality”) but you do sympathise: how could you ever look at a Santa or a Christmas window display in quite the same way?

However when Burroughs loses himself to alcohol and ends up spending three days with the bums he normally stepped over (Why Do You Reward Me Thus?) the narrative soars: his self-loathing is real, fear that this might actually be his fate takes over and his saviour is an understanding and forgiving homeless black woman who sings the aria of the title from Tosca into the snow-blown streets.

“As she sang, the windows of the brownstone across the street shimmered in reply. Her voice had weakened the molecular bond of glass. It filled the space between the flakes of snow and packed the air with beauty. It was, at once, Christmas in Manhattan. I cried but did not make a sound.”

Sentimental yes, but Burroughs doesn’t spare himself that emotion either.

The loss of his partner to Aids in The Best and Only Everything is equally moving: his description of love at first sight is the counterpoint to the slow tragedy which unfolds: “George was vertical, not horizontal. All of him was right there from the first moment. He didn’t have ‘sides’, he had fathoms. If you didn’t know him after one date, you couldn’t know him. In this way, he was a treasure perfectly hidden right before my eyes . . . I could only be truly crazy if I walked away from such a find”.

A decade after the death of George finds Burroughs sober, with a new love and domesticated: “the Audi wagon, the fake-looking real tree, the snow blanketing the landscape, smoke from Atkins bakery ovens curling into the air in soft, sweet plumes -- I thought, this is ridiculously perfect”.

Then. A burst pipe, the new home flooded, his partner helpless with panic and grief, rescue by pragmatic neighbours . . .

“Carleen had brought more than towels and a Shop-Vac and sandwiches into our home: she had brought grace itself, carried it in her bare hands and left it there for us”.

And Burroughs, the misanthropic, self-loathing alcoholic whose life has been blighted by bad encounters, a screwed up family, therapy and much more finds a meaning in this much maligned season.

“In that basket, hidden beneath one of the sandwiches . . . was Christmas itself. Pure, true Christmas. Unavailable at any mall or even Cartier. The hardy incorruptible and now exceedingly rare variety of Christmas -- more of a substance than a holiday.

“Ingesting even the smallest amount would cause you to stop whatever it was you were doing and listen, listen, listen for the sound of bells high in the sky above you.”