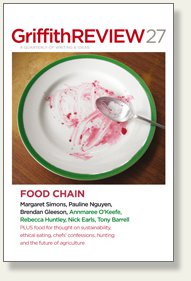 At regular lunches with a group of friends last year our conversation frequently turned to food, and not what was on our plates.

We would discuss what might be called the politics of food: how many miles particular foodstuffs clocked up to get into our supermarkets and restaurants; how certain types of fishing were stripping our oceans; and how cheap and bad food is readily available but we pay a premium for that, which in many instances, isn’t much better.

My contribution has been how we have made food a fetish: our television screens are cluttered with chefs (“celebrity” or amateur); food is driven by fashion (the “coriander wars” of the 80s and more recently “the tapas years“); bookshops are stacked with glossy magazines in which highly paid food writers go to expensive parts of Italy or the south of France to extol the pleasures of simple eating . . .

Food has long since ceased to be the stuff on the plate. It is statement of our lifestyle and a measure of our green politics, a barometer of health and the consumer society.

This edition of the very readable Griffith Review devotes itself to all of those aspects of food, and more.

By being Australian, much of the detail is not relevant to us but the broad picture is much the same. Simply stated, things cannot continue as they are.

Foodstuffs travel too far to get to us, smaller and local is better than cheap and imported, people should not only be educated in healthy eating but also in the politics of food production and so on.

If all those seem worthy -- and familiar -- ideas the power is in the details and the telling.

David Ritter considers the dumping fish (between a quarter and a third of the global catch is tossed back dead or dying, he says) and Tony Barrell wonders why his local Woolworths in Sydney stocks frozen fish from Lake Victoria (the one in central Africa) and scallops from Japan.

Some solutions to better practices are too easy to offer. Witness how many politicians will tell the poor they should grow their own veggies (and once you’ve eaten the potatoes and tomatoes, what then?) or how we should support farmers’ markets over the supermarket chains.

But much of this is unrealistic: in dense urban areas many people don’t have gardens, or they aren’t big enough to support a family. Farmers’ markets can be distant and are often filled with chintzy stalls selling exotic chutneys and homemade jam. That is food as a lifestyle accessory.

So while many of the essayists in this collection address the problem some solutions are risible. Is there really a workforce of retired people who would work your garden for a share of the produce?

But the horror stories here -- the Japanese dolphin and whale industries, how supermarket chains have cornered the market by bulk buying and insisting on quality controls that are prohibitively expensive for growers -- make for compelling reading.

This isn’t all worthy writing by food critics, bio-tech people and scientists.

There are a number of beautifully written fiction pieces here, and a memoir by Nikola Gurovic about her Cold War childhood in a village between Yugoslavia and Hungary. Simpler times in a complex world.

Hamish McDonald and Desmond O’Grady weave a historical narrative, culture and dinner into the story of June Rose Bellamy who was born in Burma (and named Yadana Nat Mai) and grew up in the cultures of her Burmese mother and Australian father. Today she teaches cooking Asian and Italian in Florence where she moved with her Italian husband.

With food politics and fiction, memoirs and scary statistics, Food Chain is quite a smorgasbord and some of it will make its way to the conversation at my next lunch with friends.

There’s something here for every taste, we might say.

See also Recipes from Elsewhere for things to tempt your tastebuds