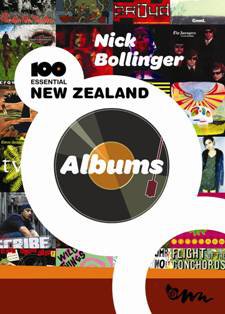 The purpose of books of lists - and the list of lists is growing by the day -- is probably two-fold: you get to look through and tick off what you've got/done/seen or whatever and make a note of other points of interest to see/collect/experience.

The second point is to argue with them: in your head you question the selections, howl in disbelief at an inclusion and rail silently at an omission that means so much to you.

So it is with this well presented, squat and neatly laid out book in which New Zealand writer/broadcaster Bollinger makes the case for 100 albums (which he explains exclude classical, jazz and other single genres but err towards pop and rock).

Bollinger also explains his sensible criteria for a great album (it is a programme of music, and it had to be speak across the decades to him today). That excludes music so locked in its period that it now sounds naff and dated (MiSex's Graffiti Crimes), but not other music of its time which still enthralls for its sheer energy (the AK79 punk collection).

He also concedes that the more recent releases are the most problematic: will they still speak across time in decades to come?

This is all sober and sensible stuff, and thereafter he presents a chronological selection which opens with the Tahiwis recordings in Sydney in the 1930 and closes with Pie Warmer's Fearsome Feeling of '09.

Between times there is an equally sober and sensible selction which rather lacks in surprises. The Fourmyula get three albums (some might say that is one too many), inevitably there are those signpost or milestone albums (Human Instinct's Stoned Guitar through various Split Enz, Dave Dobbyn and Crowded House albums) to that increasing diversity when indie.rock and reggae came of age before the whole South Auckland hip-hop movement emerged.

My guess is that anyone with more than a passing interest in New Zealand music would have easily half of the albums here, maybe more. He rightly includes compilations because they too were stakes in the ground (the Proud collection for example which redfined the landscape).

On each of these albums Bollinger writes a pithy piece (you don't envy him how few words he had on albums like Mental Notes, Dave Dobbyn's Twist or Dam Native's Kaupapa Driven Rhymes Uplifted for example).

Nice to see Grace's Black Sand Shore being brought to attention again, it was and is a gem.

But mostly this is a tidy if unsurprising selection -- and of course ripe for argument.

See. Any book you argue with has got to have something going for it.

This takes its place alongside Grant Smithies' more idiosyncratic collection Soundtrack: 118 Great New Zealand Albums and the Nature CD collection of top songs in the growing list of lists of New Zealand music.

So list by all means, but listen is the collective message . . .

"which he explains exclude classical, jazz and other single genres but err towards pop and rock)"

So there are NOT essencial classical, jazz and other single genre New Zealand albums worth hearing????

Just like The Listener's article late late year that listed no jazz or classical in it's round up of important NZ music.

The title should be "Nick Bollinger's Opinion of the What He Thinks Are The 100 Essencial 100 New Zealand Albums" - just an extended opinionated magazine article???

but I am biased.

And it's Nick's job to inform, which is what, i guess, he is doing with this book. No offence to Nick meant - just the lack of complete coverage of New Zealand's wonderful rich and diverse musical history.