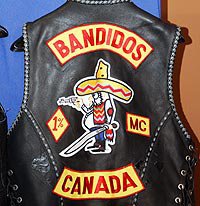 When Hunter S Thompson spent a year in the mid Sixties riding with the Hells Angels to emerge with his book Hells Angels: The Strange and Terrible Saga of Outlaw Motorcycle Gangs, he ushered in the era of "New Journalism" (in which the author is part of the story).

For his heroism under violent circumstances, Thompson became the writer that many journalists wanted to be -- but were too smart and self-preserving to try to emulate.

Hell's Angels was a terrible saga of violence and murder -- and so you look to author Alex Caine (a cop who infiltrated the Bandidos -- the Angel's great rivals -- for three years) for something equallly revealing. Caine has spent a large part of his life undercover within various biker gangs and triad groups.

The blood, drugs and murders are certainly on these pages, but Caine lacks the style of Thompson, keeps his own role quite distant and lays out the story in a flat, often quite confusing, way.

The first thing you learn is that it is difficult not just being a biker, but trying to keep up with the constant changes of allegiances.

Here is a synopsis of two paragraphs from Caine: The Hell's Angels established a chapter in Denmark in 1980 and had some trouble with a local gang named Bullshit . . . then the Undertakers, previously known as the Morticians, formed an alliance with the Bandidos .  . meanwhile in Sweden the Morbids formed an allliance with the Bandidos against the Angels and the president of the Klan, a Bandidos support club in Finland, was shot . . . so the Hell's Angels . . .

Caine's book is pages and pages of such bewildering material across countries and motorcycle chapters, all recounted at some emotional distance so that no one part seems more important or relevant than any other.

There are horrors aplenty of course -- the Father's Day massacre in Milperra, Sydney when the newly formed Bandidos and some Comacheros showed up at family day for the British Motorcycle Club which resulted in 200 police called to the scene, seven killed and 20 wounded. This was the official announcement that the Bandidos had arrived in Sydney.

The Bandidos had formed in coastal Texas in the mid Sixties around hard drinking outlaw Donald Chambers who chose the name because he revered Pancho Villa and Emelio Zapata. Their logo would be a Mexican in a sombrero carrying a large knife and a pistol. It is an odd choice for an emblem: it looks cartoon-like and bears a resembance to the Frito Bandido character used to promote corn chips.

But you didn't mess with the Bandidos: they had gold businesss cards with "we are the people our parents warned us about" on them, and FTW, "fuck the world". 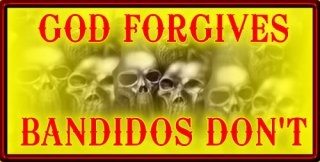 And it was in Montreal when a drug situation went haywire that there was the now notorious massacre -- eight bodies --- which opens and closes this book.

Between times however it is a difficult ride with some very nasty characters, many of whom end up dead or behind bars --- as you might expect.

Curiously -- and this might be a tip if you are considering starting up your own outaw gang -- as the Bandidos became bigger they got more organised. Where previously in Quebec, for example, you didn't need to background check anyone -- because the place was so small you knew the brothers and sisters of prospects -- the new, well intentioned boss Connecticut Ed decided on a more American-style organisation which kept meticulous records of membership and contact numbers.

That made it all the more easy for the cops to catch them, identify members and know who to wire tap.

Seems if you want to be an outlaw and stay one, you shouldn't give out your phone number. Or business card?