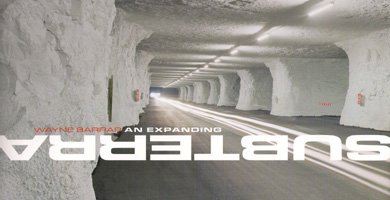 The first time I went to Las Vegas it tricked me, and I enjoyed it.

In some kitsch casino my partner and I descended a floor or two underground to a street made up to look like a New York City block. We went into an Italian restaurant which had a nice patio facing the street and I turned to her and said, "You want to sit inside or outside?"

And a few years ago on a trip around the Outback in Australia our light plane landed at the odd little outlaw town of Andamooka where people tunnel into the ground to dig for opals.

I went down one of these "mines" where people lived most of their days -- too hot to be outside in the desert -- and although it was illegal to actually live underground many people seemed to. Their mines had rooms carved out as lounges with flat screen televisions, comfortable bedrooms and kitchens with fridges and stoves.

You could sit "outside" and have a beer.

Further down however where it got dark and narrow I found a man tunneling away in a tiny space, lit only by a small lamp. It was almost frightening when he said he would lose track of time. His wife (also a tunneler) said some days they would dig for 14 hours without noticing the time.

Rolf, the Swiss guy with me, said as we blinked into the light of day "This is strange. They are  . . . underground people".

The "underground" -- in myth the Underworld, the dwelling place of demons and the damned -- has long fascinated us. And it conjures up strange associations: Hitler's bunker, dangerous mines in South Africa and China, the opal diggers of Australia, the catacombs of Rome and the sewers of Paris . . .

Or more usefully the underworld which we have normalised: the Subway, Metro, Underground, MRT, parking buildings, foodhalls . . .

The underworld -- subterra -- has been a subject for the New Zealand photographer Wayne Barrar and his recent exhibition (mid 2010) at the Dunedin Pubic Art gallery brought together his images from the opal town of Coober Pedy in Australia; businesses and storage vaults in Missouri and Kansas; underground power stations in Australia and New Zealand; carparks, office spaces and toilet facilities . . . 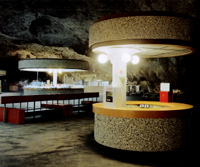 What is fascinating in these images is how people humanise their spaces: a teenager's bedroom in Cooper Pedy with its drum kit and Limp Bizkit poster looks like a kid's room anywhere -- until you notice the rough hewn walls.

There is an uneasy sense of dislocation where the smooth edges of furniture, DVD screens and toilet facilities inhabit the space of massive roughcut rock. And in the photographs of an underground boardroom in Pennsylvania or the men's toilets in Carlsbad Caverns there is a sense of power and menace as great weights of rock appear to pushing through the ceiling or walls into the otherwise ordinary and familiar spaces.

These images -- collected into this impressive, coffee-table sized book -- have a disconcerting quality. And also a rare and silent beauty as Barrar concentrates on the space rather than those who inhabit it.

Some of the images capture that bleached out underground world where fluorescent tubes flatten out the light, others glow colourfully with an otherworldly quality.

And the juxtaposition of spatial elements -- a trompe l'oeil mural which suggests a Tuscan landscape, a ventilation tube leading off into a vanishing point -- play with the mind's idea of scale.

The subterra in these photographs is a place where Mankind works and relaxes, where lonely cars are stored and covered in shrouds, where lights reveal or the lack of them hides the unknown.

Bookended by insightful essays which place Wayne Barrar's work in the longer context of underground artistic exploration and within his own concerns, The Expanding Subterra draws you to this usually invisible world and invites you in.

Do you want to sit inside or outside? 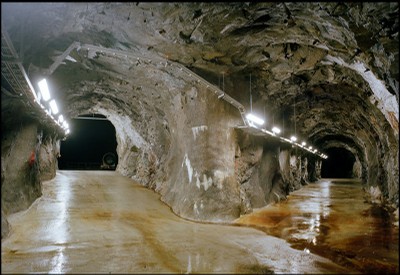 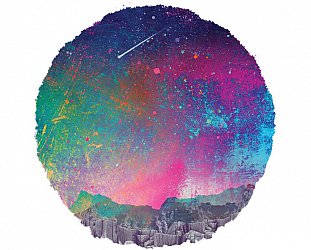 As summer arrives our attention turns to slower sounds, but if the thought of more barbecue reggae makes you queasy then this (mostly) instrumental trio originally out of Texas can oblige with... > Read more