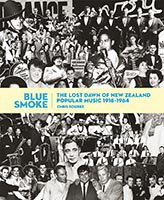 In the introduction to Stranded in Paradise, his 1987 survey of New Zealand rock'n'roll from 1955, John Dix addressed the question he had been constantly asked, “What's happening with the book, Dix?”

Doubtless Chris Bourke – a former Rip It Up editor, longtime music writer and author of the Crowded House biography Something So Strong – faced the same question these past five years.

Yet Dix had the advantage that most of his protagonists were still alive. Bourke's book goes back into a fading past, and sometimes many of those whose recollections he drew on were less than useful.

In the early days of this project I was one who did some interview transcriptions for Bourke and they were often depressing: His subjects couldn't remember places or dates – “Was that before or after the war?” – let alone the names of musicians they played alongside.

And Bourke tells with amusement of the generation gap between the subject and a young transcriber who had Gershwin's Rhapsody in Blue as Rap City in Blue.

Out of such rude and unpromising clay – and his scores of interviews, research in the archives of professionals and amateurs, pursuing the narrative in Australia and listening to hundred of hours of music – Bourke has shaped a book remarkable in its breadth and historical accuracy, and rich in its its story-telling.

As a writer he has a light and sometimes wry touch, he is generous and sympathetic to his subjects, and lets humour speak for itself while weaving though the facts.

“Hello My Dearie is an unlikely way to start a revolution,” he writes. “This light-hearted 1918 song, among others, launched New Zealand's first radio programme on 17 November 1921; it would bring the world into people's homes, and a world of music”.

Bourke had a challenge not faced by writers on more recent music: His subject was mostly live music, not recorded, and to his credit he captures telling detail to create the sense of being there when, for example, Anita Osborn in Christchurch in 1944 -- after being encouraged to sing one night in a dance hall – was instantly in demand.

“On Fridays, Osborn would get her hair set and bleached blonde – 'for a singer it had to be blonde' – and on Saturdays she would be back at the hairdressers to get her hair combed up again. Wartime clothing shortages meant it was difficult to get the material needed for a selection of especially made gowns, so her sisters helped by pooling their coupons.”

Whether it be recreating the atmosphere in the many sophisticated ballrooms in Auckland in the 30s (and some of the more sleazy ones later on) or taking the reader to a dance in a rural hall, Bourke is a reliable guide. The days of jazz and swing bands, men in bow-ties and woman in elegant gowns, sounds much more exciting than we have been lead to believe.

But Blue Smoke also includes other aspect of our history.

This is the author on the departure of the 28 Maori Battalion in May 1940: “The troop train bypassed Wellington railway station and went straight onto the wharf, with its windows shuttered. Families were cordoned off at Aotea Quay, and they were unable to watch or speak to the soldiers as they moved from the train onto the Aquitania during the night. Before dawn, women from Ngati Poneke were taken by bus onto the wharf; some in the crowd booed, but their turn would come.”

He then quotes Mihi Edwards of Ngati Poneke: “The Maori Battalion's last contact with its own people was the sight of the crowd allowed onto the wharf at the last moment, and the sound of the Ngati Poneke girls singing farewell songs as the distance widened between the ship and the shore.”

At such times – and they are on almost every one of these 400 pages – Blue Smoke resonates as a social history as much as that of music and entertainers.

While the nascent “jazz” and swing bands provide the atmosphere in the days before rock'n'roll, it is Maori artists – solo, in various bands from jazz to country, or in showbands – who are the spine of this book. Maori songs, and many with Maori references in the title (Dear Old Maoriland, Maori Eyes, Kia Ngawari and Beneath the Maori Moon in the 20s), run like a refrain throughout.

Ana Hato and Deane Waretini in the 20s; The Tahiwis who recorded in te reo in Australia in the 30s; the Ratana brass bands; Ruru Kariatiana and 19-year old singer Pixie Williams (in her hockey uniform) recording Blue Smoke in October 1949, the first locally written, recorded and released New Zealand song . . .

And beyond to Ray Paparoa (Pukekohe's Elvis) and Johnny Cooper, the Maori Cowboy, recording our first rock'n'roll song, a cover of Bill Haley's Rock Around the Clock.

And Bourke is inclusive.

Country music has rarely been hip or fashionable, but it has always been popular, if beyond the interest of most broadcasters. Yet Bourke explores this long strand through characters like Fred Mayfield's Cowboy Band who filled Auckland's Majestic Theatre in the late 20s, Pete Kloss in the late 30s (“New Zealand's yodelling cowboy”) and the irrepressible Tex Morton (songs, hypnotism and target shooting in the same show) who in the late 30s was selling more records than any other international artist in Australia and New Zealand, and more than all Australian artists combined.

Such facts – which can pull you up – are woven through this extraordinary narrative which comes with a visual treasury of evocative period photographs, concert posters, reproductions of labels from the middle of old 78 and 45 discs, and album covers.

Blue Smoke is a beautifully presented book which is reference text, bedside-table read and coffee table page-turner in one.

Chris Bourke has given us back an important part of our musical and social history, the soundtrack of which was in danger of being lost or barely audible.

A remarkable achievement and a marvelous book which sings and swings off every page.

Rex Franklin - A once in a lifetime experience, a reward for us early entertainers. Thank you Chris. - Jun 23, 2011

My wife Noelene and I began recording Country Music in 1956, because we loved the music, and we loved performing it. In those days, we were fairly treated by the media, we did live radio shows, but for many years we have been largely ignored by mainstream radio.
However, the advent of Access stations, means we are getting heard much more often, and it is a huge thrill to see Chris' book on the bookshelves, to show the people of today, and those of tomorrow, what we, and dozens of other fellow entertainers did for the enjoyment, not only for ourselves, but for the legion of fans around New Zealand, and the rest of the world.
As far as I am concerned, nothing touches our hearts quite like this book "Blue Smoke" Thank you Chris Bourke.

What a great read! I came up with so many people in the book. Worked for NZ Broadcasting, performed a bit myself, and worked on "Don't Let It Get You"- 6 weeks in Rotorua at the height of the showband period. Sank more than one jug with Ruru K and Jerry M, lunch with Howard M. Thanks, Chris- an awesome read. If you are into NZ music, you must get this book.