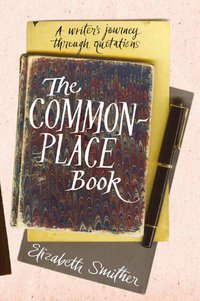 Some years ago I was walking down Queen St in central Auckland and stopped outside the Body Shop. There, along an exterior wall, was written one of those thought-provoking and inspirational quotes which are designed to prod the conscience, in this instance about the fragility of Mother Earth.

Or maybe it wasn't a quote.

It was in quotation marks, but is an unattributed quote still a quote?

Or is -- as I suspect in this instance it was -- something written in the marketing and PR department, much like those Nike "quotes" LeBron James and Muhammad Ali have written out for them and thereafter are attributed to them.

A good quote judiciously employed however can -- as President Obama would doubtless testify -- focus the mind and may encapsulate an idea in a profound and often memorable way.

In this book by New Zeland poet and writer Elizabeth Smither, we have the author's ruminations, prompted by quotes and brief poems she has gathered over the years. Some of the quotations are sassy and funny, others more deep, many lead her into a consideration of her professional life and friendships, or deeper into her work or that of others.

Throughout we met Smither's friends and colleagues, interesting anecdotes hold as much place as inner thoughts, and the death of a fellow writer or a kingfisher on a telegraph wire can lead into concisely written meditations. Another quotation will send her off on a very different tangent, into another location, through another train of thought, sometimes including a poem of her own.

And Smither is no slouch in employing turns of phrase which ring like quotations themselves: "Gifts from a person who no longer cares should be banished, almost as though they are an inimical presence".

Or this: "Nature is not neutral. It exist, it speaks, it points the way forward as in the beautiful image of a mysterious stair. Higher than death it climbs on the voice of a soprano".

That last one was prompted by Smither's quoting a wonderful poem by Anna Akhmatova who heard the voice of soprano Galina Vishnevskaya . . . and from that poem Smither recalls an argument early in her marriage when she left the house and sat across the road in her Victorian nightdress and felt the anguish pass as she absorbed the power of the night. Quite beautiful, poignant and weighted with meaning.

In the title story of my own book The Idiot Boy Who Flew I refer to a quotation by the American essayist and philospher Ralph Waldo Emerson who said, "If we meet no gods it is because we harbour none".

But then I point out quickly he also said "I hate quotations. Tell me what you know."

In this thoughtful, sometimes slightly self-obsessed but always gently provocative and enjoyable book, Elizabeth Smithers gives us both. Quotations . . . and what she knows.

THe Commonplace Book is published by Auckland University Press. $34.99