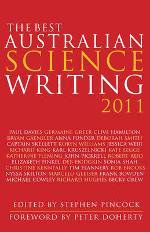 Science is a problem for mainstream media. It isn't sexy, usually can't be reduced to a snappy headline or soundbite, progress is glacially slow in a fast-turnaround world, there are too many big words, and its practitioners are often more at home in the lab than blinking into the light of the public domain.

Science takes its time. Darwin didn't exactly bolt into print with his world-changing On the Origin of Species and whatever cure there is for cancer is arriving in incrementally slow steps.

Pity the poor journalist – two days at best to get the story – coming to a significant scientific development which involves decades of prior research, complex language and a front-person ill at ease with the media.

Scientists themselves frequently find it difficult to tailor their explanations and ideas in a way which successfully communicates. There are exceptions of course. In print the late Stephen Jay Gould and Simon Singh, charmers like polymath Simon Schama, and on television Dr Robert Winston, although the closest physics may get to small-screen time is the geek sit-com The Big Bang Theory.

But science struggles on every front to get whatever message it has out there, which may explain why this anthology of almost 30 essays by some sassy Australian writers is only the first such collection. Yet here is wit aplenty and clear communication.

Richard Hughes hyperventilates about Deepak Chopra's quasi-mystical psychobabble when it intrudes into his world of maths and physics (“Holy meaningless blather, Batman!” he explodes after quoting some Chopra nonsense) and there is a tidy little piece explaining why stars twinkle. (They don't.)

Germaine Greer has a sharp and gently poetic piece on Australia's east coast floods (“Why were we so surprised?”); Tim Flannery comes over cosmic about carbon, our atmosphere and “Gaia's housekeeping”; and there are insightful articles on sound, string theory (for Big Bang Theory viewers) and Lousy science (Christine Kenneally on head lice).

Cleverly at the end of each essay – some are no more than a couple of pages – there are teaser links to other articles. However they are amusing: The pointer after the twinkling stars is to “Twinkle in father's eye” and leads you to Deborah Smith's article about saving the black rhino from extinction through artificial insemination, and also “stars” which takes you not to astronomy but the Rolling Stones and an essay on how music (specifically being in band) helps evolutionary biology (you get to meet more girls and sleep with them).

As Robyn Williams observes here in an essay under the title Science without a capital S: Battling Grumpy Uncles, Media Tarts and Jurassic Marxists, “Science is one of the few human constructs designed to test its own veracity continuously. There is no point in time in which we all nod, wise men with beards, women with six-figure IQs, and say 'That's settled . . . next!' All aspects of scientific enquiry are always under review.”

True, but so annoying in a world which requires certainties.

The crux of Williams' essay is the counter-science folk (climate change deniers in his case) who demand equal time but immediately avoid “science” in favour of democracy and “discussion”.

But in this collection they do. Not unequivocally (some are a little dogged), but here is mostly pointed, humorous, informative and clear writing about that media orphan called “science”.