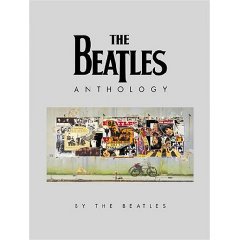 The Beatles' story has been recounted by those who knew them intimately and those who not only never met them but would seem, after enduring a few pages of their authors recycling press clippings, to have had little real interest in them.

But it has rarely been told by the only ones who know the true story -- the Beatles themselves. Until now.

After the outsiders have had their say -- and the band members themselves in the expanded DVD Anthology -- the Beatles finally tell of their extraordinary lives in print.

The Beatles: Anthology book is a handsome, large format, 368-page hardback which has taken six years of interviews, negotiation and research.

Their story is told chronologically through intercut recollections by the remaining Threetles. John Lennon's contributions are woven through seamlessly from the many interviews he gave. There is also insightful and often humorous supplementary text by longtime friends Neil Aspinall and Derek Taylor, and their producer Sir George Martin.

The colourful pages are peppered with dozens of previously unpublished photos and personal memorabilia such as reproductions of letters, business memos, and handwritten song lyrics. And the greatest story in pop -- the second greatest story ever told? -- springs to life again through their candid, sometimes contradictory, recollections.

Anthology reveals how, in the early 60s, manager Brian Epstein tried to convince them to accept £50 a week for life and that he would keep the rest of their earnings, and how Paul McCartney still feels aggrieved that Lennon has become recognised as the avant-garde Beatle when it was he who was in London hanging out with actors and artists in the late 60s. At the time Lennon was being domestic in the suburbs.

The unravelling of the dream is recounted in all its petulance, pettiness and resentment. The question of who broke up the Beatles is resolved now, as much as it ever can be.

While McCartney announced the end in a press release accompanying his first solo album, the dream was over well before.

"Everybody had tried to leave for years," says George Harrison, "so it was nothing new ... it had ceased to be fun and it was time to get out."

"It was just we were all 30 and married and changed," says Ringo Starr, the most conciliatory voice in these pages. "We couldn't carry on that life any more."

But they had remarkable lives: from humble circumstances in Liverpool they travelled the world, changed a lot of it, and sold over a billion albums. They took three-minute pop songs into elaborate orchestrations and became among the most recognisable people on the planet.

Yet, because of that all-encompassing fame, their story has been well canvased previously. There are few revelations here for anyone who has seen the extended Anthology DVD (television screened the three-hour edited version) or read some of the better band biographies.

The most interesting things are in the accumulations of small details, and their dry wit: Harrison recalls thinking New Zealand in 64 looked like "Devon, with cows and sheep."

Yet, while the Beatles are freeze-framed in the imagination (early 60s in black and white, the late 60s in dayglo), they were children of the post-war period and their recollections of childhoods are engrossing. They played on bombsites, and Starr came from abject conditions.

"We were working class, and in Liverpool when your dad left you suddenly became lower working class," he recalls. "So we moved to a smaller two-bedroom place. It had been condemned as derelict 10 years before we moved in, but we lived in it for 20 years."

"Our house was very small," recalls Harrison. "The front room was never used. It had posh lino and a three-piece suite, was freezing cold and nobody ever went in it. We'd all be huddled together in the kitchen, where the fire was with the kettle on and a little iron cooking stove. There was a zinc bathtub hanging on the backyard wall which we'd bring in and fill with hot water from pans and boiling kettles. We didn't have a bathroom ... down a little cobbled lane was the slaughterhouse where they used to shoot horses."

And in the child we see the man. Starr says that at 13 he realised Liverpool was dark and dirty. These days, he says he needs space.

"I remember when Maureen (my first wife) and I and the kids moved to Hampstead. It was very nice but I hated the garden -- everywhere you sat there was a bloody fence. So we got out; I just couldn't deal with it. I think that's all down to Liverpool being so closed in."

In these early pages it is also when speaking of music that they are most interesting.

Here's Harrison recalling the nonsense songs of his childhood: "Even the crap music we hated -- that late forties/early fifties American schmaltz records like The Railroad Runs Through the Middle of the House or the British I'm a Pink Toothbrush You're a Blue Toothbrush -- all that is in me somehow and is capable of coming out at any point. It shows in the comic aspects of some of our songs, like the middle of Yellow Submarine ... I think as the Beatles we were fortunate to be open to all kinds of music."

While their recollections take in the initial thrill of becoming famous they soon give way to the tedium of touring and entrapment they felt as musicians and individuals.

"Fame is being interrupted when you're eating by a 50-year-old American lady with a ponytail," says McCartney.

Weariness seeps through the pages of their final years together.

The multicoloured hues of LSD faded, their manager died, they ceased to be relentlessly cheerful public property. They argued and called in lawyers.

The remaining members are polite about Lennon's wife Yoko Ono, but there are telling comments.

"Yoko being in the studio was a new thing," says Starr. "We were very northern, the wives stayed at home and we went to work ... And suddenly we had Yoko in a bed in the studio. It created tension because most of the time the four of us were very close, and very possessive of each other in a way. We didn't like strangers coming in too much."

Yes, to the end and beyond they were a unit unto themselves, their closeness allowing them survive.

Starr again: "Elvis went downhill because he seemed to have no friends, just a load of sycophants. Whereas with us, individually we all went mad, but the other three always brought us back. That's what saved us."

Lennon in a quote from 64: "When I feel my head start to swell I look at Ringo -- then I know we're not superhuman."
That blunt humour and commonness of spirit is the pervading thread throughout Anthology. They were men apart -- and remain so.

"We were the only ones who had that experience of being Beatles. No one else knows what that's like," says Starr. "Even today when the three of us get together, Paul and George are the only two who look at me like I am, not with the view: 'he's that and a Beatle'. Everyone else does that, even our friends do that, there's always that underlying current."

None of us can understand what that must feel like. The thorough, candid and richly presented Anthology allows us to hear from the only ones who do. 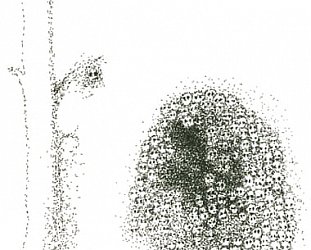