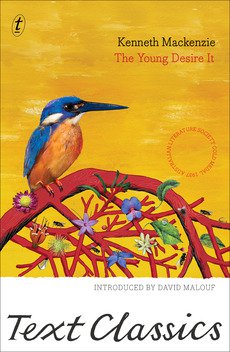 As a coming-of-age story, this first novel by a young Australian writer would doubtless alarm those who quickly leaped to condemn Ted Dawe's Into the River, which recently won this country's Young Adult Fiction award.

Mackenzie's floridly-written book has the pretty young-teen Charles Fox from a rural property in West Australia nervously off to a city boarding school where – on the first day -- he is duffed up and sexually assaulted by some rough-hewn older boys, then encounters an attractive young teacher from England smitten by Fox's feminine looks and innocence when he sees him naked in a changing room. Later – after Fox boy faints – the teacher Penworth gives Charles whiskey, then caresses and kisses him, “clumsily and hard on the lips”.

Penworth manipulates Charles' emotions, makes himself the confused boy's confidant, invites him into a world of secret passions and private discussions about desire . . .

When Charles returns home for his holidays he meets a voluptuous and sensual girl whom he falls for and she arouses other passions which infect his dreams.

“During that long hot summer, and more noticeably since he had lived among boys and listened to manly and experienced images in their talk, he was frequently aware at the back of his mind a tightness in his own loins and a warmth there, as though some hot flower were about to break from the green bud, or some ripening fruit to burst and scatter rich juices through his whole body . . . Sleep, that had been his refuge and innocence, was now his concern . . . from those deepest depths some mysterious succuba flung him face-upwards into a dark and bewildering consciousness and hot night bore down on him.”

And do it goes, page after page of steamy and often confusing passions interspersed with beautifully evocative if sometimes over-wrought descriptions of Nature which exude sexual possibilities: “The thick fleshy odour of sweating mud hung in the air here . . . when a breeze oozed warmly and fitfully down with the current, [the reeds] knocked together and rattled secretly, until it seemed that the lazy ripples whispered in that swooning air.”

Mackenzie wrote this book – what David Malouf calls “a hymn to youth, to life, to sexual freedom and moral independence” – in a five week spurt in 1937 when he was only 23. Based on his own experiences as a 13-year old sent to a boarding school in Perth, he had started it at 17 and it drew acclaim in Britain and Sydney, and won the Australian Literary Society Gold Medal. It reappears now under the Text Classics imprint.

But moral guardians who condemned Dawe's book need not worry: It will be an unusual teenager – one as rare and precocious as the author – who would make it past a few pages of this rococo but often rather lovely writing where Nature possesses a spiritual and sexual presence, and innocence is eroded by love and desire.