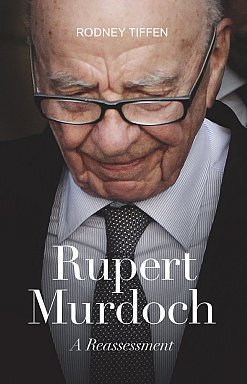 Because media baron Robert Murdoch is such a polarising figure – from a bottom-feeder driving down news content to the lowest common denominator to “Rupert is magnificent” from Margaret Thatcher -- the subtitle here is canny.

Few at either end of the spectrum want their firmly held prejudice about this man tested by a reassessment of his character and works.

Yet author Tiffen, emeritus professor in Government and Industrial Relations at the University of Sydney, concedes immediately this overview relies not on any new research, rather it explores broad themes in specific chapters about Murdoch's personality, business practices, politics and personal life which have already been aired across numerous sources.

Tiffen cleaves to no side – although only a rare soul would come away thinking Murdoch was a fine, misunderstood fellow – but offers as rounded a portrait as he can of this man whom observers have noted has no interest in sport yet made a fortune from a television sports channel, who is “unusually impervious to the personal vanities and status rewards that so many other media moguls value”, and is much less attached to money than to power.

Here too though is a man who, in the new media landscape of the internet, remains curiously attached to newspapers, even those he runs at a loss. Yet sees journalists as a necessary inconvenience.

In various chapters Tiffen traces Murdoch's politics from “Red Rupe” who had a bust of Lenin on his mantlepiece while a student at Oxford to support for the far right of the Republican party (Lenin to Palin is quite some shift). He turned his wrath – via a Sun columnist – on the backstabbers, tin pot Judases, two-bob traitors of the Tory party who had felled Margaret Thatcher.

That Murdoch's voice was behind so many such editorials and columns is in no doubt, and his reductive but obsessive tweeting in recent years is equally crude, although like a mad dog he will bite the closest. During the current phone hacking scandal he tweeted, “Told UK's Cameron receiving scumbag celebrities pushing for even more privacy laws. Trust the Toffs! Transparency under attack. Bad”. And “enemies have many different agendas, but worst old toffs and right wingers who still want last century's status quo with their monopolies”.

Murdoch pride himself on being a rogue, anti-Establishment figure (although he redefines what that Establishment is depending on his mood and self-interest), proudly anti-intellectual (he dismissed an opinion column of Nobel winning economist and Yale University's Professor James Tobin as “intellectual bullshit”) and capable of a plethora of impressive condemnations which would appeal to The Thick Of Its' Malcolm Tucker for their inclusive damnation. Among his best was “limp-wristed left-wing layabout and stuck up self-important expense-padding Trotskyites”. It almost doesn't matter who that's about.

Tiffen's analysis of Murdoch's business practices however make the most compelling reading. Murdoch gambles large and often loses, but cuts his losses and moves on. He repeatedly says one thing and does another so his “enemies”, competitors, allies and business partners are caught off-guard, and he rarely writes things down. It is all in the storehouse of self-belief, prejudice, old wounds, venality and ruthlessness he holds close.

The business case – as opposed to the moral case – against Murdoch pivots on China where his Star TV, which he bought in 93, became a business without a revenue stream when the government changed the rules and advertisers (not wanting to displease the officials) stayed away. Murdoch lacked the patience to stay the distance. And by purchasing the Wall St Journal by paying over the odds and launched a New York metropolitan section “he probably produced the greatest loss-making newspapers in history”.

So here is Murdoch who couldn't see any future in the internet but believes “winners will be those who capitalise quickly on changing opportunities . . . the challenge is to move early and innovate often”.

If William Randolph Hearst and Orson Welles' semi-fiction Charles Foster Kane hadn't got there first, here then is our Citizen Murdoch.

The New York lawyer Theodore Kheel – who acted both for and against him -- once observed “Rupert Murdoch is very good at what he does. The question is: is what he does any good?”

The answer to that is in these lucid, compelling chapters about a man you wouldn't want as either a friend or enemy.