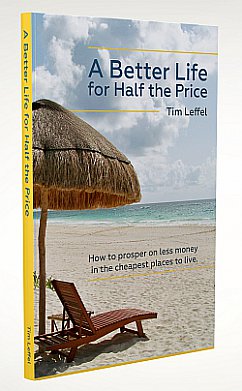 Those of us living in one of the most expensive cities in the world – that would be Auckland, New Zealand – are invariably drawn to those television programmes on the lifestyle or travel channels where people go looking for homes overseas.

That's where you see a solid, five bedroom brick home with excellent plumbing on the picturesque coast of Portugal (where food and wine are not only cheap, but good) for the same price as a small three bedroom wooden do-up in one of Auckland's very ordinary suburbs.

I'm especially taken with a programme called House Hunters International in which those who have been transferred from Chicago or Birmingham to Riga or Costa Rica are – with a limited budget – shown three homes within their price range. Okay, it's ridiculously truncated and formulaic but at least I get to see inside houses and check their amenities.

Again I look at our “three bedroom” (actually two) townhouse in Auckland beside a railway line – which we don't mind incidentally – and see what I could get for the same price in a city with better public transport and closer to the rest of the world courtesy of cheap airfare.

What prevents us from moving is the old question: “What could I do there?”

My transferrable skills are an ability to speak and write fluent English (Hmm, “village scribe” has always appealed to me) and lecturing in contemporary music. These are not greatly in demand so . . .

But that never stops us watching the programmes or sometimes reading the books by those who have made the move (not sniffy-witty Brits-in-Provence things) or have some inside running on prices and real costs when you wash up somewhere else. 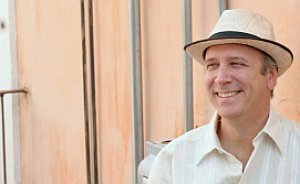 The founder and editor of the excellent and multi-award winning online Perceptive Travel site, Tim Leffel, is one such fellow.

His book is promisingly subtitled “ How to Prosper on Less Money in the Cheapest Places to Live”.

Umm, that would be me. And you?

As with all of us middle-class civilians in these straitened time, Leffel is pragmatist: it's how far does the dollar go, and what do you get for it.

In his introduction he speaks about moving back to the US after time in Mexico and finding those few dollars he was earning just slipping through his fingers. He admits he and his wife got fractious as their finances got tighter in a way they'd never previously experienced.

“I look back on those two years now with a mix of anger and relief. Anger that it's so damn expensive just to get by in the country of my birth, relief that I'm not there now.

“We moved back to Mexico in the nick of time. It took us a good while to get our empty house furnished and decorated, but meanwhile we were spending less each month than we had been just on rent and utilities in Florida . . .”

Leffel is not just a travel writer, he's lived abroad (Korea and Turkey) and in various places in the States, so he's got some inside running on what it means to relocate and how the allure of exotic places can also come with a minefield of paperwork, permits and problems. And he also wrote World's Cheapest Destinations, now in its fourth edition.

Leffel interviews people who've made the moves (NYC to Bangkok, San Fran to Delhi, Canada to Ecuador etc) and can talk actual costs, and he uses these as stepping off points into a discussion. He points out the obvious: a holiday in somewhere nice is actually more expensive than living there, warm climates mean no heating bills, you may earn less but the cost of living is cheaper, taxes are higher in Europe but healthcare is subsidised, you probably don't need one car let alone two in many countries . . .

He peppers in the social and fiscal climate of the US versus the rest of the First and Third Worlds.

He addresses those burning questions in the broadest sense: education for your kids, what if you have an accident, get used to local food and it's probably better for you than burgers'n'fries, homesickness and maybe the lack of choice in consumer goods, pets . . .

He sensibly suggests a trial run to check out things like transport, services, tradespeople and such. And offers useful advice on visas and work permits.

Then in detail he looks at your options, starting with some simple pros and cons, and gets into actual, useful detail down to the real costs of shopping items: Mexico, Ecuador, Panama, Colombia, Thailand, Cambodia, India, Bulgaria, Portugal, Nepal, Argentina . . .

Even if you get no further than thinking about a move to a more fiscally hospitable climate, this is a fascinating read because it has a conversational tone, people who've made the moves speak with candor, Leffel doesn't own a pair of rose-tinted spectacles, the information is detailed and the links to websites are practical.

He admits, “I'm not a lawyer, CPA, tax advisor, financial advisor, or doctor. I'm just a guy with a bachelor's degree from university, a blog, and a few books with my name on the spine. So consult with a professional who has letters after his or her name before making any major decisions. The information presented in this book is a collection of advice and opinions from a person who has lived abroad and talked to many others doing the same . . .”

It is written for a mostly American audience but once he drills down to detail it has much to offer anyone.

One the basis of this book I'd give this man his own television series. I'd watch.

For further information or to order a copy go here.