In recent years there has been the inevitable passing of some significant writers who shaped the way we seen ourselves as individuals or a nation.

However Dick Scott, one of our finest contributors to the national dialogue through his diverse writing, is still with us and the 81-year old still brings that astute and critical mind to bear, this time in an anecdotal and discursive autobiography.

A lesser writer might focus on their most significant contributions and pass lightly over their formative years and failings, or add self-aggrandising lustre to events in which they played a part. Scott however speaks freely and critically.

We would expect no less from the author of important histories such as those of the 1951 waterfront lock-out, the passive resistance of Te Whiti and his followers at Parihaka, and the history of families on the Kaipara Harbour.

The historian in him measures out the raw clay which moulded him through accounts of his grandparents and parents and then his own remarkable life takes off in reminiscences of a childhood marked by rural isolation, the 12 mile round trip bike ride to school despite a bus passed the farm gate, and some salty humour. (His father’s booming farts in defiance of his mother’s propriety.)

He reflects on schooldays of canings, rugby and shooting (“a maleness”) but also of a precocious intellect which had him reading Bertrand Russell at 17 and being briefly attracted by the coherence of science. Then there are his early encounters with idealistic socialism which shaped his thinking. He took pamphlets by Lenin with him when on military service in the South Island at 18.

He was briefly a seagull on Wellington’s wharfs when the inevitable showdown with his father saw him sent from the family home, and it was while sharemilking with Maori he had a crash course in race relations.

Along this journey he reveals a New Zealand long passed: the world of socialist pamphlets, photographs of Lenin on the coffee table and of impassioned debate which were high on political theory and quick, perhaps too quick he concedes, to grasp at emerging social movements.

He is also not without wry observations about the young Scott. He marries “Comrade Elsie“ and “a registrar’s office in Minsk could not have provided a more bourgeois-free ceremony than it’s Wellington equivalent on a winter’s day.”

A full quarter of his book deals with his life before that seminal event of the 51 waterfront lockout which he documented in 151 Days. Readers for whom that is but an historical footnote will be shocked by then-prime minister Holland’s injunction that anyone who limited “the handling of goods is a traitor and should be treated accordingly”.

Democracy, so hard fought for, was suspended, police recruited scab labour (by offering petty criminals the choice of arrest or work on the wharfs), and soldiers and bully boys came to town to mete out rough justice to strikers and sympathisers.

Scott again writes about this with insight but also clear-eyed hindsight.

Then it is the disillusionment with socialism and it’s the human failings of its advocates, discovering the Parihaka story, his advocacy of a New Zealand wine industry (how bizarre that must have seemed) and the minefield of writing commissioned works.

Scott’s reflections fill the margins of history although he seldom reveals much of his private life and often flicks into the third person. The closing overs where he muses over what we learn from history and its artefacts are tantalisingly, if irritatingly, brief but confirm the keen intellect and poetic heart.

Autobiographies or memoirs rarely impart much other than admiration or contempt for the subject, but Scott’s account -- full of syntactic inversion and grammatical constructions which slow the reader -- affirm that action is more effective than theory, that idealism in the young (however misplaced) is preferable to cynicism, and there can be no regret about a life lived to the full. 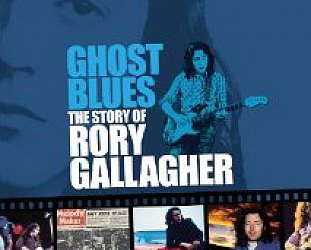 Here's one from the pub quiz: Who topped the Melody Maker poll in '72 in the best guitarist category? Of course a more interesting question might be, "How come Ireland's Rory Gallagher... > Read more