Someone clever and possibly French once said something along these lines: the truest response to a work of art is to create another.

In a slight variant of that idea, this collection of astute and sharply observed poems is Christchurch writer/teacher Holman's response to Bob Dylan and the man behind the music, but just as often the myth and the mystery of Dylan's art which has beguiled and sometimes bewildered people for more than half a century.

Holman is the unabashed Dylan junkie of the title.

He has not only followed the art (the dedication is to Pete Sinclair who played Subterranean Homesick Blues “on air for me in 1965”) but also recently made a “pilgrimage” to smalltown Hibbing in Minnesota where Dylan grew up and went to school.

So these taut, precise and evocative words are Holman's considered response to the music he has heard and the impact it made, and are an attempt to not just uncover the man behind them but locate their resonances in his own life growing up on the West Coast of the South Island.

in a jukebox milk bar chasing a girl/feel the shock of the snare drum smashing! Loose in the air Like a Rolling Stone/when he left home with no direction/the Hammond organ twisting time/bending twisting twisting time . . .

– from When the thin wild mercury music came

Holman engages with the elusive man who made this compelling music and how instructive it could be.

Only a Pawn in their Game

never'd heard the taste of that scroll

you are in bitterness

but it tasted sweet

– from If not for you

In Dylan's music is the vision and Holman's escape from the proscribed West Coast life marked out by geography and personal history. Holman gets away, eventually, into an increasingly opening world of poetics, words and music

your books your records

the ashes of your poetry

all those empty broken selves

and left your life

-- from I believe in you

The divide between the lives of Dylan and Holman is porous in many places in these pages.

Under titles which lift lines from, or the names of, Dylan songs, Holman neatly sidesteps simple replication of Dylan's lyrics or themes but rather writes an autobiography in snapshots which have the depth of emotional x-rays.

Everybody's got a twisted heart

on some she's boiling dry again

some hills the clutch just slips so bad

in the rain the vacuum wipers stall . . .

low on petrol out of smokes

-- from Time out of mind

Holman's epic here, a freewheeling but focused piece of many pages and parts uses lines and images from Dylan's A Hard Rain's Gonna Fall to itemise and analyse his own life in 12 mountains, six highways, seven forests, the mouth of a graveyard and more.

It is an expansive but penetrating personal insight which also contains the kernels of universal experiences for people of a certain age, and those a cultural distance from Dylan but who have also traveled through similarly real and surreal existences.

There is also an actual and almost encounter with Bob Dylan when both were in Camden in '93, Dylan in his top hat and gloves, Holman “maybe no more than a mile off/ down Charing Cross Road/in the Goodge Street tube/top deck up front on a number 73”.

The final piece is a series of poetic postcards Heading for Hibbing which distill Holman's literal and inner journey of pilgrimage to that remote and tough iron ore town where Dylan went mining for something different and deeper.

And everywhere in these pages we feel Holman responding to Dylan's art with his own.

Dylan Junkie by Jeffrey Paparoa Holman is in the Hoopla Series of poetry books published by Makaro Press. For further information see here.

Jeffrey Paparoa Holman has previous written a number of diverse articles for Elsewhere (birds, Bowie, a memoir about his father and a piece on Sam Hunt). See here.

There is plenty about Bob Dylan at Elsewhere starting here. 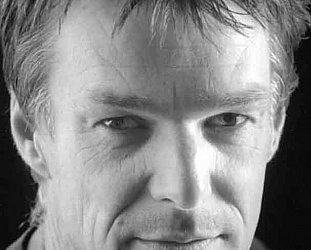