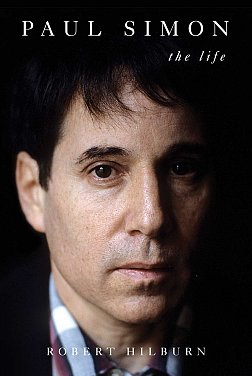 For someone who can be prickly in interviews, defensive when criticised and whose private life has been off-limits, Paul Simon offered rare and unfettered access to longtimeLos Angeles Times music critic Robert Hilburn for this account of his life from childhood to this year.

In more than 100 hours of interviews over three years, giving permission for Hilburn to speak with his friends, (Art Garfunkel conspicuously not interviewed) and allowing the author to write without interference, 76-year old Simon – now retiring from touring – appears to be considering his legacy.

His next project mooted in the final pages is to revisit some of his lesser known songs although his friend, the artist Chuck Close, is dismissive: “He'll never finish that album, it won't be challenging enough”.

He's probably right. Simon's constant quest has been for new and different musical possibilities, it wasn't about fame or acclaim: “I found out relatively quickly that fame is bogus,” Simon says.

Simon is a voracious reader and his music has drawn from doo-wop, the Everly Brothers, traditional folk, African and South American musics, gospel, classical (American Tune is based on a 16thcentury hymn by Hans Leo Hassler via J.S. Bach) and recently electronic music with Brian Eno.

In the beginning as a serious young folkie he was better received in Britain (where he wrote Homeward Bound) than in Greenwich Village clubs where he was just the kid from Queens when Dylan had blown in from the mid-West trailing romantic tales of having been a hobo.

That snub, alongside his short stature (which he mentions frequently, as does Garfunkel in a more disparaging way), pushed him further into himself.

Yet he also possessed an intuitive ability to capture the American zeitgeist; The gloom after Kennedy's assassination in The Sounds of Silence; the despair among his peers after Nixon's re-election in American Tune (“I don't know a soul who's not been battered, I don't have a friend that feels at ease”) and the prescient imagery of The Boy in the Bubble(“the bomb in the baby carriage is wired to the radio”). He can convey ineffable sadness (Still Crazy After All These Years) and unrestrained joy (Me and Julio Down by the Schoolyard).

In the early 90s, a New York Times reviewer wrote, “No other American songwriter of his generation has so consistently renewed himself while still acting his age. He's the rare pop songwriter who admits to maturity while keeping his eyes and ears open”.

However, Simon's single-mindedness often comes at the expense of relationships: He wiped Garfunkel's vocals from the album Hearts and Bonesbecause he felt the songs were too personal to come under the “Simon and Garfunkel” imprimatur.

His self-assurance backfired however when he was in the unfamiliar worlds of cinema and Broadway with One-Trick Pony and The Capeman respectively. In each instance he wouldn't relinquish control or listen to advice. Both bombed, yet Simon insisted The Capeman run another month while losing money and putting the cast through nightly hell.

“It's important not to let the chance of failure stop you,” he says. “If you don't give yourself the chance to do something extraordinary the chances are you won't.”

Hilburn reveals Simon's generosity to charities and fellow musicians (although Los Lobos are still smarting about not getting credit for their contribution to the Graceland album), and after the failure of One-Trick Pony he went to Warner Bros.' head Mo Ostin and repaid US$1 million of what they'd lost on the tie-in album.

This biography is not without flaws. Hilburn subtly sides with his subject in the tetchy, fractious and – until 2010 when the link was finally severed -- long relationship with Garfunkel. In accounts of the various breakdowns and reconciliations Garfunkel is sketched as petty, insecure and unreliable, Simon the thoughtful artist for whom musical integrity is paramount.

And in the controversy over his recording in South Africa during the cultural boycott some of the more vehement objections are skimmed over while Simon makes his case.

Simon feels his wounds acutely and many dating back decades remain at skin's surface, yet while often appearing aloof and humourless his friends included the cast ofSaturday Night Live. He has always seemed balanced yet took the hallucinogenic drink ayahuasca to excess for many years, avoids confrontation but also won't back down even if, as with The Capeman play, the evidence is stacked against him.

Paul Simon, who here eloquently deconstructs some songs important to him, is a complex artist who immerses himself obsessively in meticulously crafted projects of which he becomes fiercely protective. His music – which seems to be all he cares about, other than family – touches people deeply.

Jack White, formerly of the White Stripes and one of 10 children, once observed, “The thing I like about Paul's music is its universality”. When he went on a family picnic years ago everyone was asked to sing a favourite song.

They all chose one by Simon.

PAUL SIMON, A LIFE by Robert Hilburn. Simon and Schuster, $37.99