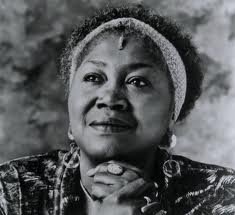 Folk singer Odetta has kept her sense of humour about the 15 year lull in her recording career.

“I’ve just been practicing," she says, but is delighted by at last having another record out there in the marketplace.

Despite her acclaim by audiences as far spread as Russia and Nigeria and accolades by Yale University, the album came about through a small personal contact.

“About 18 months ago I played a concert in Madison, Wisconsin, at the invitation of a local doctor Liz Carlin. She wanted to put on concerts there of artists she wanted to hear, and invited me. I did it and she said next time we should record it.

“She did all the research on what microphones to use and worked at a women’s festival to practice.

"So I went back to Madison and did another concert which we recorded, and it’s out now through Flying Fish on Liz’ own label. It's called Moving It On.”

For Odetta, whose previous albums were on the well known Vanguard, Tradition and Fantasy labels to be recording again was a personal lift which she feels coincides with a renewed interest in folk/blues music worldwide.

“I had years of depression through not understanding how people in the record industry were thinking. Then a song came to me called Hit or Miss, which was saying whatever they did or didn’t do I was still here, still working and still helping groups who are making this planet a better place.

"But now I get the sense there’s something happening all over again. The music industry moguls see things happening in some neighbourhoods so they put the spotlight on that area and people hear it."

At 59, Ode has been around long enough to see the fashions in the music industry change many times and in the early Sixties was swept into prominence when the folk boom put the spotlight on people like Pete Seeger, the young Bob Dylan and herself.

Ironically, she became a folk singer by chance. She was 19, acting in a production of Finian's Rainbow, when she first heard the raw sound of the black folk tradition.

"The area of songs that got me the deepest were prison work songs. When I sang them I seemed to get rid of some of my own hate and anxiety through those songs. What also got me were the Appalachian songs, their love and story songs.

“Through those song I controlled my feeling of rage and got to a place where I was comfortable with myself.

“I also found through the words a history of blacks which hadn’t been in movies, papers or history books. And today when I'm singing these things in schools I’m aware the history told is of robber barons, politicians and crooks. But I sing of regular people.

“I guess I’m an ancestor worshipper.”

Over 16 albums Odetta explored gospel, blues, jazz and folk traditions, performed alongside the major artists of the time and has continued her long associations with civil rights.

Despite not having an on-going recording career, she has been far from inactive. She travels widely (after her New Zealand concert she is off to New York, Italy, Germany, the Newport Folk Festival and dates in Canada) and picks up excellent reviews.

She is also a grass roots performer who plays small venues and, as she says, enjoys going into schools as much as concert halls.

She is concerned young blacks today are still shut out of their heritage and sees radio as having closed the doors on history.

“My kind of music is not on radio, so that’s why I go into schools. I go there for the blacks, the Chinese, Mexicans and whites to let them know there’s something outside radio.

"And, the children are thoroughly fascinated, first by seeing one lady on a stool with a guitar and that’s all. I get them to sing along and it‘s wonderful. But music has largely been relegated to an entertainment industry."

But quite how folk/blues songs click with the crack generation is a difficult point.

“What I sing about doesn’t deal with the problems of this generation in terms of being topical, but it speaks to the basis of us as human beings. The young people today are dealing with the breakdown of culture and contradictions. The crack situation is the contradiction of confusion and power.

“This time we live in is a time of not caring as long as someone makes their money.

"I deal with the basis of us all -- and that is us as caring human beings.”