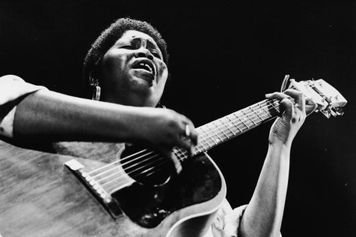 To be honest, I had largely forgotten about Odetta until she died in 2008 at the age of 77. I imagined her as much older actually as she seemed to have been around since Biblical times, or at least all of my life.

The great folk singer and activist had been an influence on the young Bob Dylan and Joan Baez, had sung in small halls and cafes, and when Rosa Parks was asked what songs meant something to her she replied, "All of Odetta's songs".

She listened to, and then sang, blues and prison songs and by the early Fifties was in New York where she sang in coffeehouses -- and also in 1960 played a solo concert at Carnegie Hall. She marched with Martin Luther King and . . .

But that isn't my story: I interviewed her in '89 when she came to New Zealand for a concert at the Auckland Town Hall -- which was the single most embarrassing concert I have ever been at. It was strange.

First of all there was no one there. Well, maybe about 20 people -- and my seat was in the balcony. Not a soul around me.

I said to usherette I would just move down to the front on the ground floor where there were hundreds of spare chairs . . . and she said I had to stay in my allocated seat. I moved anyway.

The few folkies in evidence roundly booed, slow-clapped and heckled the opening act -- a fine blues singer from Wellington with a guitarist -- because they just wanted to see Odetta and go home. They were nasty people in my book.

However it was an odd concert.

Odetta appeared at start carrying incense and lead the audience into singing that godawful Kumbaya, then disappeared while the locals tried to make an impression.

Odetta came back to warm if barely audible applause and sang a terrific, strident set of deep blues and folk. But there were so few people there I just felt embarrassed for her.

However when she died I looked back on my interview with her. The opening lines said it all: "[She] has kept her sense of humour about the 15 year lull in her recording career".

As she graciously accepted the applause after her final song she'd clearly also kept it about playing to huge, but empty hall in Auckland.