Nigel Williamson is both amused and slightly annoyed that not only did Dylan start making some of the best music of his career, but he also took on Williamson's area and proved to be one of the best writers about music (his autobiography Chronicles Vol 1) . . . . and as if that weren't enough he went on the airwaves with his radio hour and proved an exceptionally witty, informed and sly host as he played music of all persuasions and reached back through the decades for rarities and obscurities.

Right now Dylan also has an exhibition of his paintings and -- accusations of "copied" aside -- it seems that the man is a polymath. Can his career in architecture be too far off?

And the radio show wasn't just picking a few songs and blabbing in between, the challenge set was to have the programmes themed.

Okay, it probably isn't too hard to get a dozen or so songs together on the theme of death, drink or women's names . . . but tears, shoes, laughter, luck?

And okay, Dylan had research assistance. But his often funny and informative links -- where he might quote poetry or offer a quick recipe -- were all his own. And he seemed to know as much about old reggae and contemporary music as he did about obscure blues and folk.

The programme ran for 100 episodes (that's a lot of music and a lot of themes) and now three double discs have compiled (not thematically) presenting 150 of these diverse, sometimes strange, rarely familiar and often loveable songs, without Dylan's linking commentary of course.

And although the themes have been relegated, that just adds an element of surprise to these sets. You cannot anticipate what will come next.

Back-to-back on the first disc you get Shortin' Bread by Paul Chaplain from 1960 (from the show about food) then the White Stripes' Seven Nation Army (the Countdown show), Gun Fever by the Valentines from '67 (opening three in a row around the theme of guns) and then two versions of Pistol Packin' Mama (Al Dexter 1942, the Hurricanes from '08).

There are some well-known if democratically inclusive names scattered throughout on the first set: Otis Rush, Charlie Rich, Memphis Minnie, the Stanley Brothers, Billie Holiday, Aretha Franklin, Alton Ellis, Louis Jordan, the Modern Lovers and others.

And the Donay's original Devil in His Heart which the Beatles gender-flipped for George Harrison on With the Beatles.

So here are old blues and country alongside Jack Teagarden's Chicagoans, the Clash and Joe South, Dinah Washington and Santiago Jiminez. And that is just the first set.

Yet this diversity works because evey next track can be a discovery or re-discovery in this very different contact.

The final set has an interesting line above the track listing on the back: "Only Ace Theme Time Radio Hour CDs are fully authorised and represent the full range of music played on the shows -- beware of mountebanks". 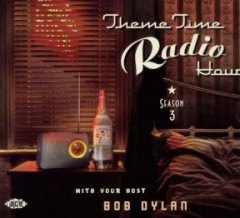 Lovely word that, and perhaps it refers to this collection.

These three collection have certainly had a lot of love put into them.

Each comes with a thorough 48 page booklet in which each song is briefly essayed, album covers or old discs are reproduced and there are photos of the artists.

As the intelligent liner introduction to Volume 1 says, "[Dylan's] expansive choice of music provides a treasure trove of joy and wonder. Each song tells a story, revealing another element in his kaleidoscopic vision of America -- and the universe at large".

These collection may, in some hands, serve much the same purpose as that Harry Smith collection did for Dylan and those of his late Fifites/early Sixties generation.

And if it doesn't do that but just entertains, then there's nothing wrong with that either.

This is certainly an entertainment, and an education of you want it to be.

Hidden gems then? Let's just pick on the third set: I'm Nuts About Screwy Music (Jimmy Lunceford from '35); big Dave Batholomew's The Monkey Speaks His Mind (essayed by Elvis Costello); the baritone barroom ballad It's Nothing to Me by Sanford Clark from '67; Bucket o' Blood by Big Boy Grimes in '62 warning about a less than welcoming juke joint; the Four Deuces' W-P-L-J (aka White Port and Lemon Juice which Zappa covered) from '55; the soulful original of Go Now by Bessie Banks which the Moody Blues covered . . .

Aw gee, I just named about every track in the first 10 on this disc (and skipped Elvis' Little Sister!) so . . .

As Van Morrison said, "Turn on your radio" . . . and if you can't find one with a playlist this good then you've at least got these three sets to go to. 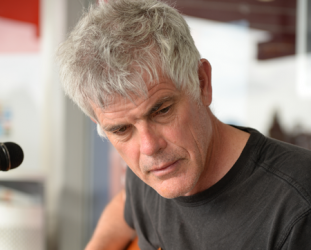 Earlier this year we not only favourably reviewed Luke Hurley's new album Happy Isles but also – because he has been such a singular and visible figure in recent New Zealand popular music... > Read more