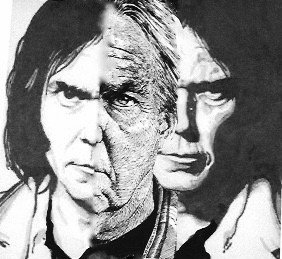 An image not as successful as I would have liked at the time (I was in a rush) but afterwards I warmed to the fact that it slightly more dislocated and dislocating than I had intended.

That aspect suited the idea of Neil Young to me.

As even the most casual rock listeners must know, for the past couple of decades Young has been releasing numerous albums out of his archives (live and studio recordings) alongside his current work.

The result is an inevitable comparison between Neil then and Neil now, perhaps.

Many of his recent new recordings often seem pale shadows of that earlier work, especially the folksy/country studio albums where he seems to have all but given up trying to say something coherent and meaningful over any sustained period.

Live of course he (and Crazy Horse) can still stir the pot, but again the recent release of the thriling Way Down in the Rust Bucket recorded in '90 cast his latest with Crazy Horse, Barn, in an unenviable light.

But perhaps that's just me.

There are people out there who hang on Neil's every release, I'm just more picky.

So in 2018 when I considered a new release alongside one from his vaults it was very much Now and Then.

I prefer young Neil then to Neil Young now.

So here he is -- dislocated and dislocating -- then and now. 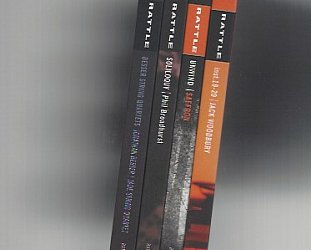