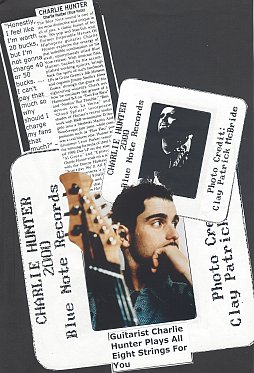 Although I interviewed Charlie Hunter before a concert here I think this image of the jazz guitarist actually accompanied an article in Real Groove magazine.

The year when that might have happened is lost to me.

But Charlie was a big deal with a new generation because in addition to great jazz chops he covered contemporary material, among them Nirvana's Come As You Are  . . . although he said he wasn't particularly a fan of the band's delivery but admired Kurt Cobain's songwriting.

So this piece was a collage of quotes and ideas and images to give a visual picture of the man in a shape which vaguely suggested a guitar.

Charlie Hunter was a joy to do PR for when he was signed to Blue Note. I loved his live shows and he was friendly, enthusiastic about doing interviews. Still have his albums from that era.