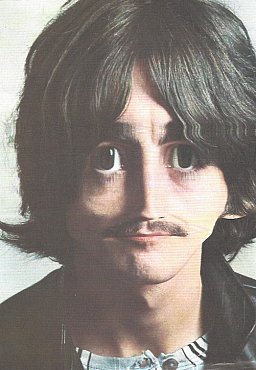 As regular followers of Elsewhere's shamlessly stupid Absurd Elsewhere pages will know, sometimes for my own amusement I just make stuff up, like newly discovered albums, lost Beatle releases, academic articles full of pompus nonsense and so on.

This image was one I prepared to accompany an article about an anniversary reissue of the Beatles' White Album but as a remix by George Martin's six-year old granddaugher Gillian Martin and more remix versions by Yoko Ono, on one of which she strips out all the vocals and instrumentation . . . hence The Whiter Album.

You can read the full article here where I "remixed" photos of the other Beatles and reproduced the new Whiter Album cover.

What we used to call "as low day in the office" perhaps . . . but sometimes people take the Absurd Elsewhere pages at face value despite the articles being littered with clues that they are just amusements.

And there is more Art by Elsewhere here.