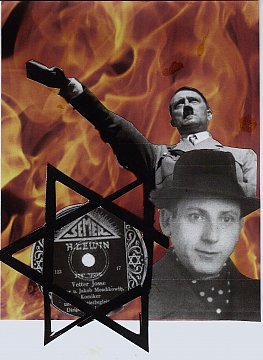 Few people would want to write about, or hear about, the worst aspects of humanity. But if we didn't then, as the philosopher said, if we don't learn from history then we're condemned to repeat it.

Tragically, we don't learn and we repeat: everywhere from the India/Pakistan partition and Northern Ireland to Biafra, Cambodia, Israel/Palestine, the various -stans of that interminable warzone of sand, mountains and tribalism . . .

History is there to remind us -- if we care to stop and listen, look and learn.

Humankind is a stupid, dumb, violent animal which is territorial, better at harbouring grudges than finding a bridge, and seemingly wants to pass on a gene of division/hatred/anger to the next generation which deserved better than to carry the prejudices of their parents and their grandparents before them.

This collage was never meant to be subtle, nanced or layered. It is simple: Hitler has to be here; that increasingly mad, racist despot who is always an attention-getter (for the Right and, sadly it seems these days, all the wrong nationalistic reasons).

And a man who inspired mass murder, lest we forget. A serial killer who guised his madness with a "politcal" agenda. As so many -- then and now -- do.

This blunt blade was created for an article about an important collection of Jewish songs from Berlin of the Thirties which appeared on the Semer label (semer means song in Hebrew) which, of course were . . .  let's just pander to current politely inoffensive jargon and say . . .  "cancelled".

Canceled forever if these racist killers could have their way, right?

There is an exceptional story attached to this deliberately awful art which these days, regrettably, probably shocks no one.

But that story and the music is here.

Sometimes a blunt blade is more important than nuance, subtlety or humour.