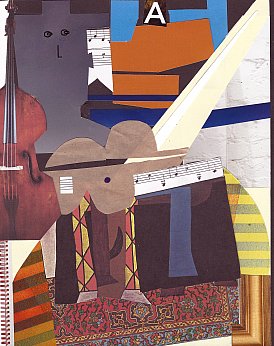 When considering a couple of albums by jazz guitarists Ralph Towner and John Abercrombie in 2017, I was struck by just how old they were: these were men now in their Seventies and yet I still thought of them as being maybe late Thirties or early Fourties.

For some reason the idea of visual homage to older artists -- be they painters or musicians -- came to mind and Picasso's Three Musicians of 1921 seemed an obvious reference point.

There was a collage element in that work and as that was the medium I was using I thought . . .

But because I wasn't dealing with a trio I deliberately only alluded to a face but placed the guitar at the centre and the bass prominent also. There's a snippet of Three Musicians in there for those who know the work.

You can read the article this accompanied at Elsewhere here. The title I gave that piece also referred back to this image.