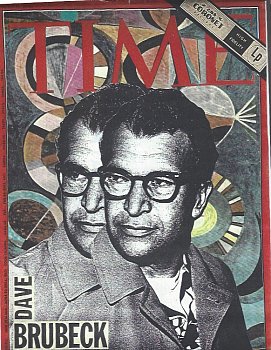 When I first thought of doing a collage to accompany a piece on Dave Brubeck this idea was almost too obvious: in his younger days he had been on the cover of Time, and his most popular album was Time Out which included the memorable Take Five.

It was that Time Out album (the original of which I still have) which attuned me to jazz in the years before the Beatles. I have told some of that story here and to this day if I want to explain jazz in 10 minutes to young students unfamiliar with the idiom it is to that great five-minute piece written by Paul Desmond with Joe Morello's shapeshifting drum solo that I turn.

They get the idea of improvisation immediately. And it is a real nice tune which is easy to remember.

So if the Time cover -- with the image from the Time Out album behind Brubeck -- was a bit obvious I needed something to make people look, lest they think it was a real cover I'd used.

Hence the Coronet banner and the double image where the pianist seems to have a three-part set of spectacles across two faces.

The article this piece was written on the occasion of his death in 2012 -- which I linked to the 1992 box set Time Signatures -- but for some reason I didn't use this collage there.

But I must have used it somewhere because I was quite pleased with the end result of a lot of cutting and pasting.