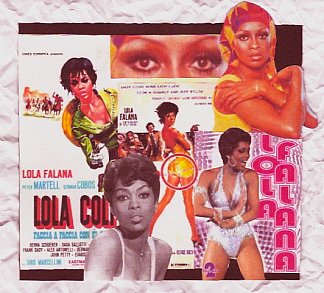 I'll be honest, I'd never heard of Lola Falana until was flicking the pages of coffee-table book of photographs by Sammy Davis Jr.

And I learned two things: Sammy was a more than decent photographer-cum-documentarian who, of course, had "access" to his scene with Sinatra and the rest of the Rat Pack; and that Lola Falana -- who was his partner for a while -- was an astonishing physical and emotional presence, even just in photographs.

So I started to read about her and found out about her life as a singer, dancer, movie actress, Vegas staple, US television personality who had her own show . . .  and that she was also a "showgirl" . . .

So I could hardly resist the blindingly obvious Manilow-referencing title on the article I wrote: Her Name Was Lola, She Was a Showgirl . . .

I have no idea whether Barry Manilow was acknowledging her, but I susepct he was, because she was such as a star in her day (which encompassed the Sixties and Seventies).

As to the collage?

Given I had know nothing of her, I worked on the -- possibly flawed principle -- that few others at this distance had either.

So I played up her looks, the movie posters, the sensual and sexual glamour of this remarkable and largely forgotten multi-talented artist who put black women in the foreground.

At the time of this writing she is 78 and debilitated by MS but, I guess and hope, still has the faith in her God she turned to and which sustained her.