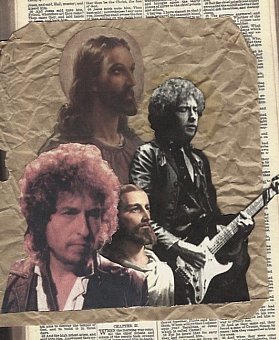 It's hardly surprising that Bob Dylan gets dozens of articles at Elsewhere, he's 80 after all and that means not just six decades of music but reviews, overviews and that on-going and sometimes terrific Bootleg Series.

Most in that series are interesting if not revelatory, although the Basement Tapes thing has never had me once replay it.

However much to my surprise -- given his so-called Christian Trilogy was much reviled --his Trouble No More expanded collection of a lot of live versions and previously unreleased songs from that period had me going back to it time and time again.

Most people, even Dylan fans, had already screwed down their preconceptions and my guess is very few bothered to make the time for it.

Well, my feeling is they missed out.

When it came to doing a collage for it (the box set cover was pretty mundane) what else can you do but bring in Jesus and scripture?

That's what he did.

And I thought I'd make the backdrop look crumpled and slapdash (although the well-produced albums actually weren't) but the page from the Bible more clear as it sat behind all of that.

Hmmm. Not sure it works in quite the way I intended.

The article this art refers to is here 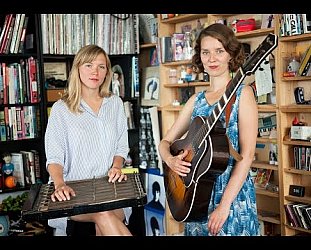 Now don't be put off by the name which conjures up Anika Moa's recent albums for wee ones, My Bubba from Sweden/Iceland's most recent single Gone was recorded by Jack White in his Third Man... > Read more