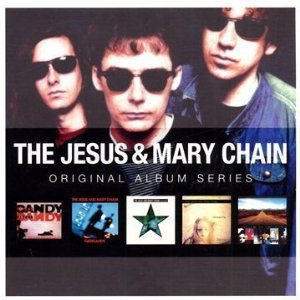 The Jesus and Mary Chain out of Glasgow certainly alienated audiences when they first appeared: not the least for performances which barely stretched past the 15 or 20 minute mark.

But it was their noise-drenched guitar sonics and distant, droning vocals on their debut album Psychocandy in '85 -- which took aspects of the Velvet Underground one step removed and distilled them to essentials -- that had some recoiling. And they were loud.

Critics loved them -- the critics were right -- and Psychocandy is a cornerstone album in any loud alt.rock collection. They were also enormously influential (many forget that in Britain the VU were less influential than they were among alt.rock bands in the States or the Antipodes) and even today in bands like The Pains of Being Pure at Heart you can hear an echo of their intensity and pop smarts.

And the JMC did craft pop songs -- albeit burying them behind a shield of daunting guitar static. Some Candy Talking from Psychocandy has a lovely understated melody (compare it with the Church's Priest = Aura). The JAMC songs are frequently cousins from the same VU/Ramones family bloodline via a reductive version of girl group pop. And the Beach Boys in the case of Never Understand.

Their second album Darklands ('87) upped the melody factor considerably and is perhaps their most approachable; Automatic ('89) seemed a retreat or holding action; but by Honey's Dead ('92) and Stoned And Dethroned ('94, which included contributions from William Reid's girlfriend Hope Sandoval) their reputation was secure -- even if their future wasn't.

Always a volatile band (two brothers, and others) they inevitably split and just as inevitably later reformed. But their most significant music (if not always their most popular) had come on those first two albums, and was scattered on the other three.

And these five albums are currently available at JB Hi-Fi stores here for a paltry $20. That is certainly a (noisy, parent or Pop Idol-baiting) Bargain Buy.