There's a fairly lazy shorthand about Aerosmith, they are the band that so wanted to be the Rolling Stones that over time frontman Steve Tyler and guitarist Joe Perry started to look like Mick and Keith.

That is sort of true, but --  especially in their early days -- they had a rock momentum and sound of their own. They did however draw from the Stones template which means that they learned "the blues" secondhand, but they certainly made a fair fist of Bull Moose Jackson's 1952 jump jive hit Big Ten Inch Record ("She said, 'now get out your big ten inch . . . record' ".

Matters of taste aside (and rock'n'roll isn't about good taste anyway), this album still stacks up.

Aerosmith had more of a funky strut in their step than the Stones ever had and by this time their riffs were stadium-sized. They'd worked hard around the clubs and bars of Massachusetts for years, had recorded two previous albums, and started touring nationally to bigger and bigger audiences. When Toys in the Attic came out it delivered two hit singles (Sweet Emotion and Walk this Way) and took up residency in the US charts for two years.

In 2004 James Hetfield of Metallica was featured in the Mojo column, Last Night A Record Changed My Life . . . and guess what he chose?

He said he liked the rawness and looseness of Toys and as a kid dreamed of seeing them in concert: "The melodies were really hooky, they had a strong image, a street vibe which they lifted from the Stones and a real raunchy rock'n'roll feel".

He also noted they could play any style -- and Toys in the Attic showcases that: shuffle and rock'n'roll, jump jive and funky strut, ballads and memorable one-note riffs.

And of course, Walk This Way which was given a new life when Run DMC picked it up and did that terrific crossover rap'n'rock version with Tyler and Perry (and the wall's came tumbling down video, see below) in '86.

And Sweet Emotion which captured the spirit of the era in the film Dazed and Confused.

Yes, there is an argment that perhaps the more Beatles-influenced Rocks from the following year was a better album. But for Aerosmith, and a lot of people it all began with Toys in the Attic. 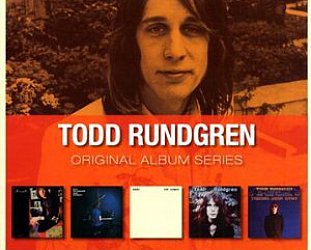