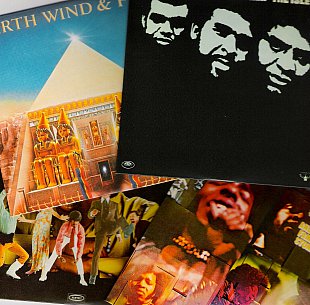 In a previous Bargain Buy column we bemoaned that the great Isley Brothers had been unfairly overlooked by rock's history writers. I guess that's because most of those scribes are white and tend to favour white acts.

Might also explain why Sly and the Family Stone have been similarly relegated.

Yet those two acts delivered up some of the most soulful and funky rock music around, and we need only look at what (white) acts covered Isley material.

Few however would dare try their hand on the music of Sly because it was so steeped in soul-funk and his mult-racial band also had something else going for it.

I remember in the late Eighties a young rock writer telling me that the Dan Reed Network -- remember them? -- were the first multi-racial rock band. He was serious but shut up when I mentioned the Jimi Hendrix Experience and then, as a cruel counter-punch also threw in Sly and the Family Stone adding, "and they had women in the band too".

And the good news if you are curious about these acts but a bit on the cheap side is that they have collections in the Sony budget price reissue series.

So here are some funk soul brothers (and sisters) and with these collections being just $20 at JB Hi-Fi stores (here), that makes these our Bargain Buys.

Sly and the Family Stone: A Whole New Thing/Dance to the Music/Life/Stand/There's a Riot Going On

These are the first five bona fide classic albums from Sly covering '67-'71 and ending with that killer Riot album where they really tapped the funk and, as the American mood turned from psychedelic to sour, hooked in to the prevailing disenchantment. The albums before that cover pop, soul and stoner rock-soul.

Quite a journey and quite some music from one of the greats, who also had greats (Larry Graham, Cynthia Robinson, Ike Turner, Billy Preston and others) in for the shows and sessions.

By the time this collection starts (in '69) they'd already been around for a decade writing and making hits. The covers of their songs by the Beatles and Rod Stewart did better than their own versions which might explain why for Givin' It Back they decided to cover material by Stephen Stills, Dylan, James Taylor and Neil Young.

These albums chart their move from soul-funk into a more rock approach (without getting too far from their roots in rhythm and blues). They are one of the few bands who can sing "my love is like a vacuum cleaner . . . it keeps pulling me in" (on Brothers Isley) and still sound convincing.

Earth Wind and Fire: That's the Way of the World/Gratitude/Spirit/All in All/I Am

Jeez, what didn't they include in their sound? It's all there from soul and funk to rock and pop, jazzy horns, classic ballads, disco . . . This collection cleverly adds the 2000 reissue their live Gratitude between the studio albums which effectively picks up songs on albums prior to That's the Way of the World.