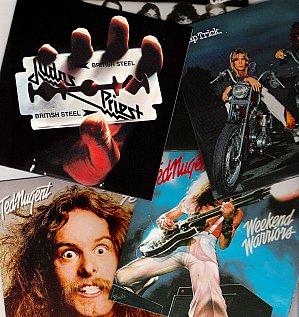 This will be brief because not everyone in Elsewhere's world likes the sound of a roaring jet engine in their ears but . . .

There is certainly a place for stadium-sized metal-edged rock which is why we here turn the spotlight on two of the five-CD collections in the Sony album series: Judas Priest and the mighty Ted Nugent.

The Judas Priest set has in it Sin After Sin, British Steel (essential metal), Turbo, Painkiller and Angel of Retribution which effectively picks up about every second or third album between 1977 and 2005 (and offers diminishing returns right at the end). But the earlier albums are well worth checking out.

Ted Nugent's early years are his best (he's a bit of a cliche and self-parody these days tho' I wouldn't say that to his face) so this is mostly a good collection with his self-titled album from '75 then Free-For-All, the excellent Cat Scratch Fever, Weekend Warriors and -- skipping State of Shock -- onto Scream Dream of '80.

As with the Judas Priest, most of these albums come with extra tracks.

And although they aren't metal (just a wee bit lacquered over their power pop) we're going to once again draw your attention to Cheap Trick and a collection which has their three minor classics Cheap Trick, In Colour and Heaven Tonight plus the later All Shook Up and Next Position Please.

To get the full Trickery you also need this collection we mentioned previously.

So there you go: noise, metal-edge button pushed and power pop passing itself off as stadium rock.

And because each of these five-CD sets are just $20 at JB Hi-Fi stores here, that's why these are this week's Bargain Buy suggestions.