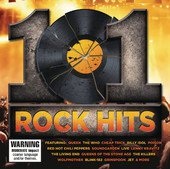 Okay, it's got the unforgivable Cranberries on it -- those awful shits, see here, with that ridiculous Zombie, of course -- and quite a few other songs you probably hoped you'd never hear again.

This five-CD set -- which predictably opens with Queen's We Will Rock You and moves through familar Who (Baba O'Riley), Cheap Trick (Surrender), Patti Smith (Because the Night) and Elton (Crocodile Rock) and so on -- still manages to provide a pretty decent rock soundtrack to a party.

Huey needs to know that not even ironically is it Hip to be Square but you're still on Rick Springfield's side when he wants to be Jessie's Girl . . . and you do want to see that clip when the JJ Giels Band sing Centrefold because it makes more lascivious sense.

But it isn't all classic hits-retro because here come System of A Down (BYOB), Korn (Freak on a Leash), geometrically-funky Living Colour (Love Rears Its Ugly Head) and Wheatus (Teenage Dirtbag). Among other unexpected tracks.

So a collection which has QOTSA, the Killers, Wolfmother, Grinspoon and Fall Out Boy in the same box as Billy Idol, Journey, Steve Ray Vaughan, Toto and Joan Armatrading probably has something going for it.

But who woulda thunk they'd buy a collection which allowed in Poison, Quiet Riot, Warrant (Warrant??) and Britny Fox alongside Europe (nope, it's Rock the Night instead), the Angels, Bullet For My Valentine and the Spencer Davis Group . . .?

Disc four -- which has considerable filler -- is the weakest here, but otherwise a mad rock, Australian-compiled collection which serves a greater purpose.

But doesn't have Cold Chisel?

They must have better lawyers.

Literally 101 songs -- one of them by the godawful Cranberries however -- which fills a gap, starts a party (either disc one or the final one, depending on if your friends are 60 or 30), and probably gives Spiderbait a nicely unexpected if modest royalty cheque.

It's also just $25 at JB Hi-Fi stores here, and so if it's never-mind-the -occasional-misstep-in-quality it is certainly feel the width.

And that makes it a Bargain Buy.

More whammy bar for your buck? For the full track listing go here.