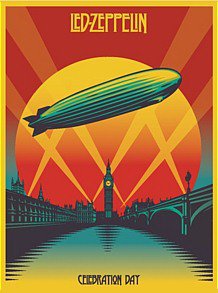 Here's a very timely Bargain Buy for you . . . because later this week we shall see the release of the next two Jimmy Page remastered Led Zeppelin albums.

We've had the first three, now here comes ZoSo/IV and Houses of the Holy, each in a version with an additional disc of alternate mixes etc.

And as you may see also at Elsewhere, Jimmy Page's photographic autobiography is now available at a much more reasonable price than the collector's edition which previously appeared.

So it's Led Zeppelin time again . . . and if you don't have this particular set in your collection you are missing out.

Here is the beautifully shot DVD of their 2007 reunion concert at the O2 stadium in London, plus a double disc of the concert.

We've already essayed this set on release two years ago (see here) and mentioned it and the concert again here.

So no need to go over the ground again.

But more than just being timely to mention this, it is also now just $20 from JB Hi-Fi stores (here)  . . . and that includes free shipping anywhere in New Zealand.

And that friends, is a very tidy and very loud Bargain Buy.

By the way, Elsewhere has a considerable amount of Led Zeppelin material in its archives including interviews with Robert Plant, Jimmy Page and John Paul Jones. Start your trawling here.