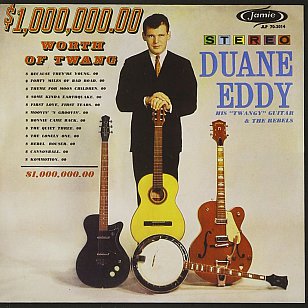 Although they might have looked and sounded more tame than their counterparts who followed in the mid Sixties, the late Fifties and the pre-Beatle years boasted any number of "guitar hero" figures, notably Link Wray, Hank Marvin (of the Shadows) and the many anonymous players in surf bands.

Among them was Duane Eddy who scored huge hits with Rebel Rouser, Ramrod and the theme to the film Peter Gunn. He was the king of twang and in fact his debut album in '58 (produced by his co-writer Lee Hazlewood) was billed as Have 'Twangy' Guitar, Will Travel . . . a play on the title of the popular US television Western at the time Have Gun - Will Travel.

Duane Eddy was the gunslinger guitarist and he counted among his admirers just about every guitarist on the planet.

In fact when he recorded his self-titled album in '87 the guests included George Harrison, Paul McCartney (who produced a couple of tracks), Ry Cooder, James Burton, Steve Cropper . . .

Eddy -- who grew up in Arizona where he met Hazlewood, who produced Movin' 'N Groovin' in a huge water tank to get the right echo -- had a lot of country in his playing but his sound was pure rock'n'roll.

This album from '60 opens with Rebel Rouser and includes signature pieces like Bonnie Came Back (like the Beatles but independent of them he covered My Bonnie), Movin' 'N Groovin', Forty Miles of Bad Road, the rockabilly Some Kinda Earthquake and other archetypal twang-rock'n'roll.

There are also orchestrated pieces and romantic pieces (the MOR Quiet Three, Because They're Young which could be a Western theme, Theme For Moon Children). First Love First Tears is indeed an eye-watering piece of string-soaked, romantic schlock.

But it goes out on Kommotion.

There's probably a Duane Eddy greatest hits album out there, but this is the album that people got in '60 and, at just $7 from JB Hi-Fi stores here, it's a cheap entry into Duane and Lee's world of twang.