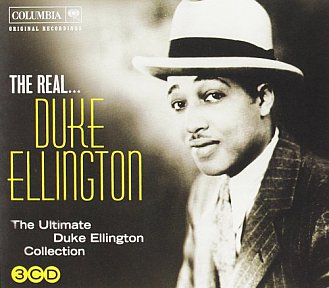 Many years ago I posted a piece about Duke Ellington under the heading "A genius, but not that great?" in which I referred to the argument by jazz scholar James Lincoln Collier. His thesis was that gifted though Ellington was in a number of areas he was not a genius in any, so therefore . . .

I pointed out the flaw in this, but one reader took extreme exception and thought I had dismissed Ellington.

Regrettably, for some reason, that comment appears to have disappeared but if you care to read what I wrote I think my point is clear.

Ellington was remarkable on just about every count (although there remains the case that he wasn't a pianist in the major league) and was one of the great collaborators and arrangers.

His classic work (from the late Thirties to the dawn of the Fifties, then again in the late Fifties for a decade) should be in any sensible collection, but this triple album of his early work (all recorded in the Thirties) is very easy to like.

There are a lot of standards and reworkings here (It Don't Mean a Thing, St Louis Blues, Sophisticated Lady, Prelude to a Kiss, In a Sentimental Mood, Echoes of Harlem and Caravan among them) and with 75 remastered tracks in total it is certainly a generous dollop of Duke.

And what makes it even easier to enoy is that it is just $10 at JB Hi-Fi stores here.

There are number of cheap titles in this series (Sinatra, Armstrong, Basie, an excellent Elvis Sixties set and so on) so we cheerfully make this a bargain buy -- despite the lack of liner notes and performer credits -- which is also a trip back in time to pop song-sized jazz.