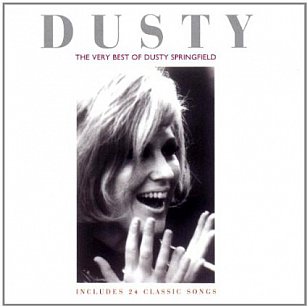 Some things have a longterm impact on an impressionable young teenage mind. So when my older sister said something like, "That's a man" when the heavily made-up Dusty Springield appeared on television some time in about '65, I could never look at Dusty the same way again.

Not that looking at Dusty was important, it was what came out of her slight frame that counted . . .  and even as far back as the folksy single Island of Dreams with the Springfields in '62 you can hear A Voice.

That song isn't among those on this excellent loosely-chronological 24 track collection (it isn't really missed) which pulls together most of Dusty's Sixties hits (I Only Want To Be With You, Stay Awhile, Wishin' and Hopin', I Just Don't Know What To Do With Myself, Little By Little, The Middle of Nowhere, Anyone Who Had a Heart etc) but only Son of a Preacher Man from her classic Dusty in Memphis album.

It mostly covers the Sixties therefore (In Private and Nothing Has Been Proved from '89 pop up in odd places) as does the late career-revival What Have I Done to Deserve This with the Pet Shop Boys ('87).

So it's slightly all over the place but at its heart is the expressive and sometimes powerful voice of the late Dusty Springfield.

It is also only one in a three-for-$20 CD deal at JB Hi-Fi stores (here) which also has Crowded House's Woodface and the Dire Straits debut among many others.

But while you are there pick up Dusty in Memphis. A classic then, a classic now.

And she wasn't a man.