B.B. King (born Riley King on a plantation in Itta Bena, Mississippi in 1925) has arguably been the blues' greatest populariser, so his track record includes performances with the Duke Ellington Orchestra, Stevie Wonder and the Memphis Horns, Joe Walsh, the Crusaders, Gary Moore and, of course, U2 and Eric Clapton.

That kaleidoscope of other talents on hand plus King's breadth of stylistic excellence - from Memphis blues with Phineas Newborn Jr on piano for his 1949 debut Miss Martha King, through to the Elmore James slide style on Please Love Me from '52, to the pop ballad Don't Get Around Much Anymore -- made his handsome box set King of the Blues, 1949-91 less a chore or worthy document than a potted history of a man whose career seldom faltered.

King took the blues from out of the South around the planet more times than anyone could care to recall.

Even in the early Nineties when the collection appeared King was playing almost 300 gigs a year and cannily tailoring his material to the youthful demands of the U2 crowd, stretching out his distinctive guitar lines for jazz/blues festivals and toughening up when playing for predominantly black audiences.

For almost 65 years B. B. King and his guitar Lucille have captured the imagination.

Scrupulously polite but often impenetrable as an interview subject -- all of those he has worked with are “fine young men" (U2) or “a fine gentleman" (Gary Moore) -- King has been populist but uncompromised as a blues guitarist and singer.

Ironically, he was originally known as a guitarist and in fact, if you listen to the chronological sequence of King of the Blues, it isn't until the sixth track, Everyday I Have the Blues from '55, that the truly distinctive, lazy King vocal style kicks in.

His career stumbled only a couple of times, notably when he signed to ABC-Paramount in the early Sixties when they put him in a blues balladeer context clearly aimed at mainstream acceptance. No bad thing, but the Mr Blues album came with cover notes which suggested eerily that “it's entirely possible that with the release of this album B. B. King will show up as a guest on The Ed Sullivan Show, sign to do a David Merrick musical, appear with the New York Philharmonic as Leonard Bernstein explains the blues . . . In other words, acceptance.”

Well, it didn’t come that way thankfully, and ABC -- after the great, spooky Help the Poor with Latin percussion and no King distinctive guitar part -- recorded the man in his finest context, at the black theater the Regal.

The resulting album, Live at the Regal of '65 (only one track in the box set, reason enough to get it to accompany this career overview) was a watershed. He would never be expected to even modestly compromise again . . . and it came on the cusp of the British blues boom.

The career that had seldom been less than extraordinary now went global.

King of the Blues covers all this ground -- including superb insights such as the unreleased, live Goin' Down Slow recorded in Chicago in '67 -- and yet . . . that many years, all those albums, all that music, they still cannot be encompassed here.

Seventy-seven tracks spread over four CDS -- many of them previously unreleased and a dozen or more rarities scattered through -- might seem rather too much B. B. King for most tastes. 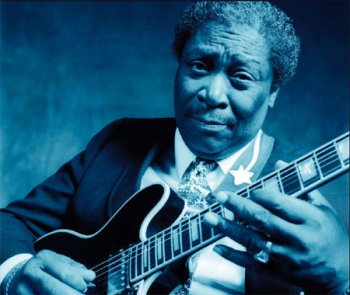 But longtime King followers wil bemoan the paucity of material from Live at the Regal, the Lucille album from '68 and, yes, maybe Thank You For Lovin' The Blues would have slotted in neatly at the end of the third disc right after the two great tracks To Know You Is To Love You and I Like to Live the Love from the same album.

But that is probably being churlish and picky -- because King of the Blues offers a swag of B.B. -- from his Memphis-grounded, Chicago-influenced urban blues of the Fifties through to the unreleased Many Miles Travelled written and produced by Living Colour's Vernon Reid.

The distinctive caricature at the head of this article is by the artist Kerry Waghorn. See here.