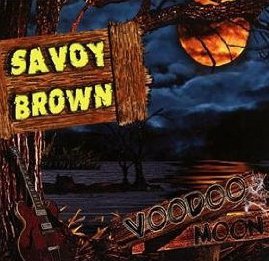 Many years ago Pete Frame would produce books of meticulously drawn family trees of rock bands. His Sabbath Bloody Sabbath tree filled two tightly written gatefold A5 pages and traced Black Sabbath back to bands that Ronnie Dio and Bill Ward were in around '64.

I don't recall ever seeing a Frame family tree for the British blues band Savoy Brown (although they did get a passing reference in the Sabbath tree) because I suspect Frame decided he didn't have that much time in his life.

Formed in '65 and with the sole constant guitarist/singer Kim Simmonds, they have had a merry-go-round of members and it actually comes as a surprise that a band under this name is still going. In the past 45 years members went off into (sometimes briefly) bands like Fleetwood Mac (when they were a blues band), Foghat, Chicken Shack, UFO and the Big Town Playboys (?) while some arrived from Jethro Tull, Chicken Shack . . .

But here they are again, up to what must be about their 50th (at least) album with Simmons still enthusiastically peeling off classic blues licks and delivering a very nice vocal line on the moody original Round and Round.

Time is perhaps taking its toll a little as he admits on another original he sings, Natural Man: "I ain't no Jesse James or an outlaw on the run, a hoodoo man or the fastest gun . . . There's no John the Conqueroo in my pocket today, I don't have a magic spell to lead you astray, I don't have a voodoo child or a crawling king snake . . ."

Sort of an anti-blues blues song, but honest enough for all that. Simmonds is 64.

But -- with yet another line-up around him -- Simmonds' playing doesn't sound diminished by the years and in fact, and this is accepted in the blues, he is probably getting better by playing less and being more considered. You do wonder why he needs vocalist Joe Whiting however who, good though he is, is hardly distinctive and Simmonds acquits himself well enough on his two vocals.

But, as the final track title says, this meets the blues head on in a slightly wordy, sometimes near-rock way (She's Got the heat with some slewing slide, Meet the Blues Head On).

Although it breaks absolutely no new ground, this is a fine late-career album from Simmonds and Savoy Brown, and doubtless won't be the last.

Thanks Graham for this review I will pick it up. It will bookmark nicely my two SB CDS of 'Shake Down' and the 'The Savoy Brown Collection feat Kim Simmonds 1967 to 1978'. Shake Down was there first and although it featured all covers its a powerful Blues record up there with Bluebreakers with EC and Fleetwood Macs first and they had a black singer, When on "Black Night" Brice Portius sang 'and my brother is down in Vietnam' with such emotion you almost believed he was, though we will never know. You blues guys out there check this record out

John the Conquer Root was and is a legendary root black folks used to cast love spells. It was first mentioned in Willie Dixon's Hoochie Coochie Man as recorded by Muddy Waters. or more:
wikipedia.org/wiki/John_the_Conqueror
Also, I think Kim is only 63 and this is his best work in 35 years. I have heard them all. I believe it is their 45th LP.

Have now picked up the CD and it is very good. Can't stop playing it. Kim Simmonds guitar is all over it and I can't get it out of my head

Although there is a decent reading of this poem on the Ginsberg box set Holy Soul Jelly Roll; Poems and Songs 1949 - 1993, this rather poorly captured version is much more affecting and, in its... > Read more